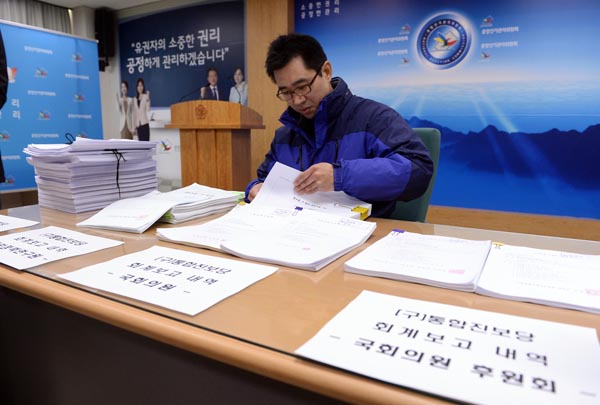 The Unified Progressive Party (UPP) had only 7.47 million won ($6,745) in the bank from donations made in 2014, according to the National Election Commission. The funds of the disbanded party were seized by the election watchdog and will be given to the government.

The confiscation of contributions to the ill-fated leftist party is in line with the Constitutional Court’s landmark ruling last month to dismantle the UPP for following socialist ideals pursued by North Korea, undermining the democratic order of South Korea. The court’s ruling also stripped the party’s five lawmakers of their Assembly seats. The tiny size of the balance in the party’s contribution account sparked speculation that the party intentionally spent all its donations or funneled some to other accounts prior to the ruling that disbanded it.

The state-run election watchdog said the confiscated funds were only 1.2 percent of the 611 million won the UPP raised last year in donations.

Last January, the UPP still had 534 million won of the donations it raised in 2013 in its account. The party’s two lawmakers elected through the proportional system, Lee Seok-ki and Kim Jae-yeon, each reported they had 140 million won they received in donations left in their accounts.

Former lawmaker Lee Sang-kyu reported Sunday that he had 480,000 won left from 170 million won he raised in donations last year.

The election commission reported Sunday that Lee Seok-ki, who is appealing to the Supreme Court his conviction for discussing a rebellion against the South Korean government and a nine-year prison term, raised 54 million won last year even though he was locked up in jail. Of the 54 million won, his staff members spent all but 1.8 million won. Former lawmaker Kim Jae-yeon raised 54.9 million won in contributions and left 1.8 million won in his account.

The election commission will make public a list of assets held by the UPP headquarter, its provincial and city branches and a think tank on Thursday.

“We will ask the prosecutors to launch an investigation if we find a trace of political funds being funneled out prior to the court ruling,” said an election commission official.