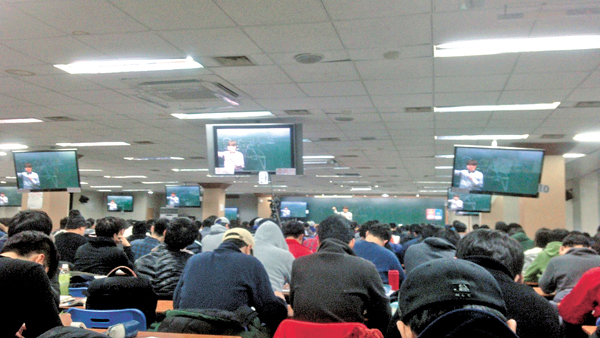 Hundreds of students in their 20s and 30s attend a lecture on Korean history at a cram school in Noryangjin, southern Seoul, on the morning of Dec. 16 to pass a national exam to become police officers. Students wait up to an hour in line outside of the classroom to get seats closer to the teacher. By Kang Jin-kyu

“Twenty more minutes,” he says, shivering and turning to check how many students are lined up behind him.

It’s 8 a.m. and Jung is waiting for his first cram school class on Dec. 16, when Seoul’s temperature dropped to minus five degrees Celsius, about 23 degrees Fahrenheit.

“I have to come early to get the seat I want,” the 29-year-old explains. “I’m lucky today because I’ll only have to wait half an hour.”

Once inside the cram school, it becomes apparent why Jung comes early. The classroom is a vast commercial office space crammed with hundreds of desks. The lecturer is so far away that 10 large TV screens dangle from the ceiling throughout the space so students can see his face.

Jung claims the seat he wants. The other desks fill with men and women in their 20s and 30s. The first class of the day begins. It’s Korean history.

“Good morning all,” says the lecturer in a rushed tone. Cram schools try to project an air of efficiency. “Let’s resume from the last lecture.”

But they’re not known for speed. The lecture goes on for four hours. 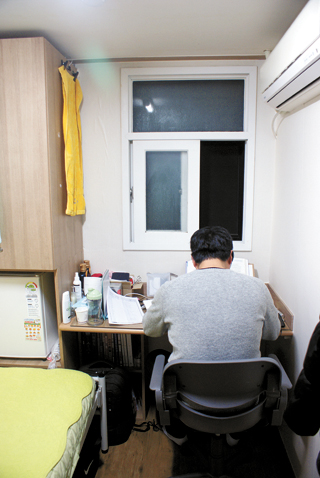 Jung Moon-jung, a full-time student for the past year, studies in his one-room apartment for the national exams to become a government employee. He is one of some-10,000 students in Noryangjin, a hub of cram schools and cheap apartments for aspiring civil servants in southern Seoul. By Kang Jin-kyu

“It’s very important that you know about the Seokguram Grotto,” the lecturer says, “because it appears often on the test.” For four hours, no one asks a question and only a few look at the teacher. They bury their heads in textbooks and take notes furiously.

“I begin my day by with my first class at 8:30 a.m., which lasts until 1 p.m.,” says Jung, who graduated last year from a university in Cheongju, North Chungcheong, with a business major. “I don’t close my eyes until after midnight.”

Jung is one of an estimated 10,000 young Koreans who have put their lives on hold to prepare for the exam that will open the door to a career as a civil servant, in Jung’s case a cop. The exam is called the gosi, and the people preparing for it are known as the gosisaeng, or gosi tribe. They give up jobs and even nascent careers to study. They spend 400,000 won ($361) or more per month on prep classes. They move to the Noryangjin area of southern Seoul, a kind of modern day Shaolin Temple for gosisaeng, and subsist on instant noodles in broom closet-sized apartments. They avoid family and friends leading normal lives with careers and relationships and the carefree freedoms they can’t afford. Because they have to study. All they do is study until the day of the all-important test.

And if they fail it - sometimes by a single question - many keep studying on. There’s always another gosi on the calendar.

Jung has been a gosisaeng for a full year.

It’s a tradition that dates back to Tang Dynasty China and the imperial examinations that were used to recruit the mandarinate. The system was adopted by Korea’s Goryeo (918 to 1392) and Joseon (1392 to 1910) Dynasties. China gave up the exam in 1905, but it continues on in Korea. The Chinese were famous for studying so long that many succeeded in becoming mandarins only when they were already middle aged - or dying unsuccessful.

Contemporary Koreans don’t go to such extremes. But a sense of desperation among the gosisaeng is definitely palpable.

And that desperation is probably on the rise. 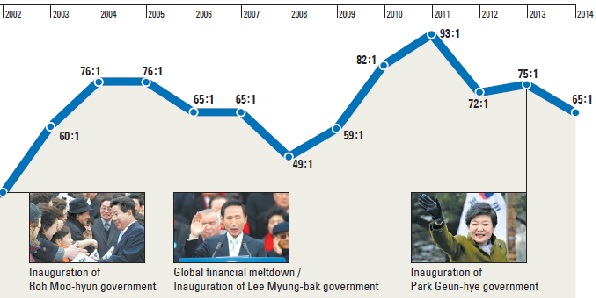 Despite the Miracle on the Han, Korea’s rise to become Asia’s fourth-largest economy, people still seek out boring jobs in city offices or patrolling the streets for the job security they offer. The ratio of gosi test takers to positions available this year was 65 to 1 - far greater than the 1980s, when Korea was poor, or the nadir of the 1990s, when the private sector was the only place for a reasonably bright Korean to look for work.

An early peak for the gosi tribe in terms of test takers was 1998, the rock bottom of the Asian Financial Crisis, when the promise of lifetime employment by Korean companies was basically withdrawn forever. In that year, 80 people competed for each available job.

With Korea heading for an era of slow economic growth (and possibly Japan-style deflation), an unemployment rate of 10.1 percent as of November, ceaseless reports of major companies planning layoffs of workers in their 40s and 50s and of people sitting atop voltage towers for months to protest being laid off, demand for the kind of job security that only the government can offer is plainly on the rise. The ratio of test-takers to positions exceeded that of 1998 - when Korea’s economy was in its worst crisis ever - in both 2010 and 2011.

“It’s estimated that nearly 10,000 young men and women are taking classes at more than 30 cram schools in Noryangjin,” said Lee Dong-kyu, a curriculum director at Agro Exam, which he said has nearly 3,000 students enrolled.

“You might think not many students from top universities such as Seoul National University, Yonsei and Korea University would want to become low- to mid-level bureaucrats. We find a surprisingly high number of test takers from the country’s three top schools.”

Gosisaeng pay close attention to recruitment announcements by the central and local governments at the end of a year because the number of people they plan to hire varies from year to year. But the number of civil service jobs remains high. From 665,895 in 1981, the figure reached 931,025 in 2005 and is around the same currently.

The exams have similar questions, so to increase their odds, bureaucrat-wannabes take both tests. The lives of most gosisaeng, therefore, revolve around the schedules for those two exams.

The competition rate for central government positions reached 65-to-1 last year. For local governments, it was 19.2-to-1.

Older and more experienced candidates can try to enter the civil service or police in grade-seven positions, and different exams are held for them. In addition, entrance to the nation’s diplomatic academy, law schools and the bar are based on exams. People studying for them also gravitate to Noryangjin and its cram schools. They are all considered gosisaeng, and they look and act it.

They tend to dress in a similar way: sweatpants and winter jackets. The women have a who-gives-a-damn look. Though young Korean women are usually known for their makeup skills, you don’t see much makeup in Noryangjin. Or much smiling. Most walk with their gazes on the pavement.

Some read textbooks as they walk. Food carts sell cheap gimbaps (seaweed rolls) and stir-fried rice cake. In most neighborhoods of Seoul popular with young people, couples dominate the sidewalks and backlanes. Singles predominate in Noryangjin’s students’ area. It’s a home every one of them wishes to escape.

After the Korean history class, Jung heads to a cafeteria run by his cram school. A single meal ticket costs 4,500 won. If you buy 10 tickets, you get a 10 percent discount.

Jung’s daily schedule is unvarying. He wakes up, waits in a line for classes that begin at 8:30 a.m. and run through 6:00 p.m. and goes back to his tiny rented room to study until midnight.

Jung says there are days when he doesn’t utter a single word. There’s no need to. All the students around him, whether in the classroom, cafeteria or on the streets of Noryangjin, are competitors desperate to become what he wants to become. It’s not surprising, he says with resignation, that no one in Noryangjin is motivated to make buddies.

Even wanting to make a friend is wrong in the Noryangjin context, Jung says. He quotes a bromide about the studying process: It’s a battle against yourself.

“The most difficult thing about living as a gosisaeng is the sense of sheer loneliness you experience,” says Kim Su-bin, a 26-year-old student who has been cramming for nearly two years to become a policeman after he took a leave of absence from Sunkyeol University in Gyeonggi.

Kim Hi-young, 30, has spent the last four years cramming to make the cut to become a grade-nine civil servant. She has taken 10 exams so far. She flunked a few of them by a question or two.

“I decided to become a civil servant because of its promise of lifetime employment,” says Kim. Kim landed a job with Nonghyup, a bank, on a two-year contract after she graduated from Chungju Univerity. She hesitated to take it. She finally decided that studying for two years for the civil service wasn’t much worse than working as a bank teller without the promise of a staff position.

“Not knowing whether the bank would extend my contract propelled me to study for the gosi,” she explains.

But she didn’t succeed in passing the test - and those two years have grown into four. She’s determined to pass the exam scheduled for April.

“I missed my last exam just by two questions,” she says, “so I’m still holding onto the hope that I will make it the next time.”

After a day of classes, Jung locks himself into his room at a gosiwon, literally test abode. Gosiwon are buildings subdivided into one-room residences about two meters (6.6 feet) long and two meters wide catering to students preparing for national exams. Noryangjin is full of them.

Along the narrow corridor, the tiny rooms are lined up next to each other with a shared bathroom. Signs warn against distracting noise: “Do not open your door so hard. Please be wary of the sound of your footsteps.”

Inside Jung’s room is a bed that barely fits his 180-centimeter (5-foot-11) height, a desk and chair.

Sitting on the chair, Jung begins memorizing English vocabulary. His desk is plastered with post-its with definitions of English words and terms.

Jung is not sure if he will ever use such English vocabulary after he passes the exam and becomes a policeman. That’s hardly the point. The exam is coming up and it has an English section. In fact, Jung is most worried about the English section because of a seemingly endless amount of vocabulary he has to memorize. Korean history is tough too due to the notoriously enormous depth of historical facts and numbers that must be memorized.

To dry his clothes, hangers are propped all around the room. Much of Jung’s wardrobe is hung right above his bed. When he lies down, he looks up into jackets and coats hanging above him. It is inside this two-square-meter (21-square-foot) room that he spends at least four hours studying after dinner before going to bed.

On weekends, Jung may not leave the room except for a meal. He gives himself a break on Sundays by watching dramas and movies that he has downloaded on his laptop for hours.

There is a total silence throughout the gosiwon, down the narrow corridors and through the thin walls that separate the rows of rooms. Jung cracks open a textbook. As of today, he has 41 more days to go until the fateful exam that could set him free from his toil and isolation - or return him to the arduous life of a gosisaeng. 