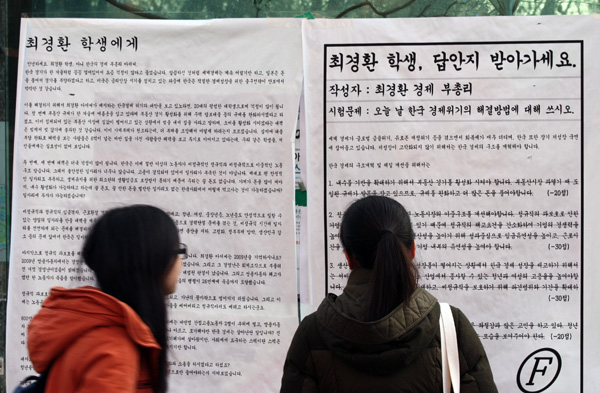 On a freezing winter day last week at Kyung Hee University, two large posters tacked onto a bulletin board made national headlines, even though the campus was almost empty, with most students already home for winter break.

“Explain the solutions to Korea’s current economic crisis,” read one daejabo, a Korean word for a poster that expresses the writer’s personal opinions about a subject.

Below was written “Name: Choi Kyung-hwan,” the finance minister, along with an “answer sheet” that listed his key economic policies to revive the real estate market, strengthen flexibility in the labor market and boost the number of part-time jobs.

The whole list was crossed out, and in the bottom right-hand corner was Choi’s grade: an F.

Another poster right beside it was a letter to Choi, signed by Choi Hui-yeop, a political science and diplomacy major at Kyung Hee, who also made the first poster.

Other students echoed Choi Hui-yeop’s feelings, lashing out at the minister’s policies.

In the letter, the 24-year-old condemned the finance minister’s recent comment that the overprotection of permanent employees was causing a bottleneck in the labor market and a surge in the temporary work force, and that if it were easier to lay off permanent workers, the job market would become more flexible.

“Now, he’s trying to slash permanent workers after doing the same to temporary workers, teenagers, female workers and casual workers under the name of labor flexibility,” the student wrote.

Choi, in response to the daejabo, said he would “talk with the young people” soon.

“College students in the 1980s used to criticize the government, but now, they’re calling for solutions to issues regarding their personal livelihoods, like jobs and houses,” said Jeon Sang-jin, a social studies professor at Seoul National University (SNU). “It means they’re that desperate.”

Kwon Hyeong-gu, a vocational education and work force development major at SNU, said he’s “dubious” whether the older generation really understands the issues that people in their 20s are coping with.

But Lee Taek-kwang, a professor at Kyung Hee, said that most of the students’ anger stems from a generational conflict. “College students nowadays blame their parents’ generation for today’s social issues,” Lee said.