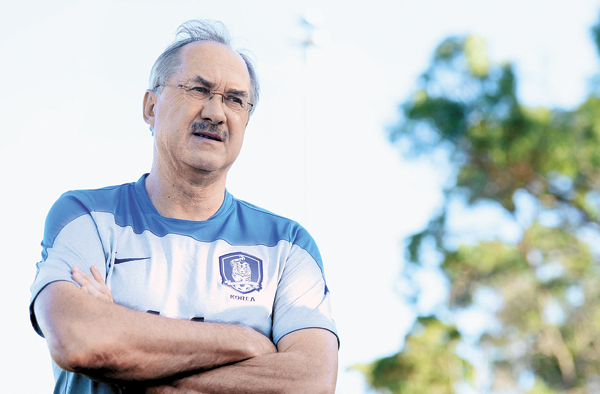 Uli Stielike, the national football team manager, watched the Taegeuk Warriors get off to a good start in Australia on Sunday when they won their friendly match against Saudi Arabia, 2-0.

But now, the German manager will lead the team in an attempt to show a decent performance in the Asian Football Confederation’s Asian Cup, which starts Friday.

South Korea is in Group A along with Oman, Kuwait and Australia, the host, and the team is set to face Oman on Saturday, followed by the other two next week. The friendly against Saudi Arabia was a test to prepare the Taegeuk Warriors for its matches against the two Middle Eastern countries in the group.

Even though Oman is ranked 83rd and Kuwait 120th in FIFA rankings, the Middle Eastern sides pose a major threat to South Korea, which ranks 66th. Kuwait has gone 8-9-4 against Korea, and Oman has posted a record of 1-3 in the four times it has faced the Taegeuk Warriors.

Australia is 94th in world rankings, but because the team is playing on home soil, it is the second favorite in the competition after Japan, according to online betting websites bet365 and skyBET.

Korea is usually considered the third-best team in the Asian Cup, but there are several key players who could help push the team to the top.

Midfielder Son Heung-min of Bayer Leverkusen, for example, was the most threatening player in Sunday’s friendly and can break through the defense and make plenty of attempts on goal.

On the other side of the field is midfielder Lee Chung-yong of the Bolton Wonderers. The 26-year-old has appeared in 64 international matches and his experience is expected to be a major boost to the team.

Midfielder Ki Sung-yueng of Swansea City is known for his ability to stabilize play. ESPN FC has also taken notice, saying, “Ki, who incidentally spent some of his youth living in Brisbane, is expected to play a major role in determining the outcome” in the match against Australia.

On defense, the Taegeuk Warriors are counting on 34-year-old Cha Du-ri, the team’s oldest member. He has played in 70 international matches and is the son of legendary striker Cha Bum-kun.

Ahead of the start to the competition, Stielike is trying to change the team in accordance with his own principles. For example, he selected the inexperienced Lee Jeong-hyeob for the team, and the forward proved his worth Sunday by scoring in injury time.