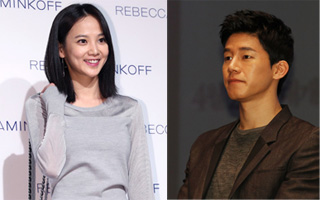 Actor Kim Moo-yeol and actress Yoon Seung-a will tie the knot in April.

Both of the actors’ entertainment companies released statements on Monday saying the two would get married in the suburbs of Seoul on April 4.

They began dating in 2011 and went public with their relationship in 2012.

Apart from their statements, Kim shared his marriage plans on his online fan club on Monday.

“I’m writing today not as an actor but as an ordinary man who is about to start a new chapter in my life with my loved one,” he wrote.

The wedding will be for close friends and family.

Kim has had a prolific career in musicals in recent years while Yoon appeared in the drama series “I Need Romance 3” last year.