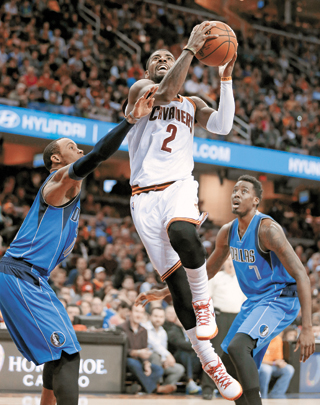 While the wins keep piling up for the Dallas Mavericks, all the Cavaliers keep adding are injuries.

Monta Ellis scored 20 points, Dirk Nowitzki added 15 and the Mavericks won their fifth straight game Sunday, a 109-90 victory over the Cavaliers, whose news on the injury front gets worse by the day.

Cleveland again played without LeBron James, who is out with knee and back soreness. Kyrie Irving left in the third quarter with lower back tightness and won’t make the trip to Philadelphia for Monday night’s game.

“I’m in a lot of pain right now,’’ said Irving, who missed two games last week with a sore left knee. “I just have to get through it. It stinks because you have two injuries at one time.’’

Irving, who scored a season-low six points and was 2 of 9 from the field, said the injuries aren’t related.

As his team raised its record to 25-10, Mavericks Coach Rick Carlisle recognized the Cavaliers are far from full strength.

“This is the kind of team we’ve got to beat,’’ he said. “They’re without the best player in the world and lost one of the best point guards in the league. They were already down bodies when Kyrie went out, but I really did think it was a harder game than the score indicated.’’

James missed his fourth game in a row and fifth of the season. The Cavaliers are 1-4 when the four-time MVP doesn’t play and have dropped 5 of 7 overall.

Nowitzki has 27,397 career points and is 12 shy of tying Moses Malone for seventh place all-time.

Kevin Love scored a season-high 30 points, but the Cavaliers couldn’t stay with the Mavericks, who had six players in double figures.

Before the game, Cavaliers General Manager David Griffin said speculation about Coach David Blatt’s job status was “ridiculous’’ and added no change would be made.

The Mavericks, who wrap up this three-game trip Monday in Brooklyn, are 10-0 on the road against the Eastern Conference this season and have won 14 straight overall against the East.

Dallas went ahead for good late in the first quarter and built a 57-42 lead two minutes before halftime. The margin grew to 20 in the third.

Chandler Parsons, Tyson Chandler and J.J. Barea scored 14 points apiece for Dallas, which shot 56 percent and made 12 of 26 3-pointers.

Rajon Rondo, who scored a season-high 29 points Friday against Boston, was held to four points and had eight assists in 27 minutes.

“We get out and run, so I love it,’’ Ellis said. “He’s a great floor general at both ends of the court. We’re doing good, but we can do better. We made the extra pass today, and when we move the basketball like that, we can put teams in a bind.’’