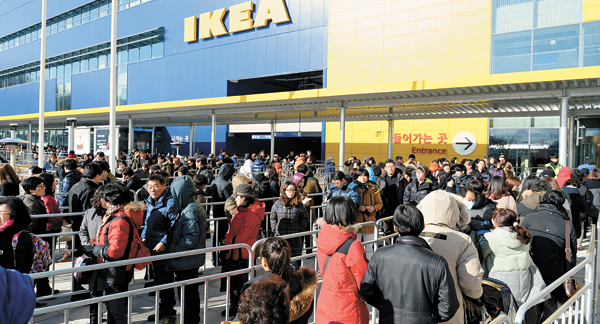 A huge crowd lines up at Korea’s first Ikea store in Gwangmyeong, Gyeonggi, on its opening weekend last month.[JoongAng Ilbo]

Once bustling with newlyweds and customers looking for household furniture, Maseok Furniture Complex in Namyangju, Gyeonggi, feels like a ghost town. On a recent Saturday at 1 p.m. - the peak shopping time - the commercial street lined with independent furniture stores was largely empty. The winter wind kicked up the dust and torn, abandoned flyers flew in every direction.

Kim Yeon-hwan, who runs a store called Innocent and Apina Furniture at Maseok, was pounding the pavement trying to talk customers into his store.

Not so long ago, he wouldn’t have imagined himself in the freezing temperatures outside. He was too busy catering to a steady stream of customers. 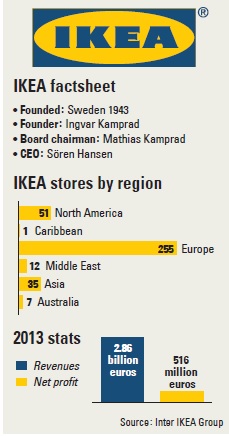 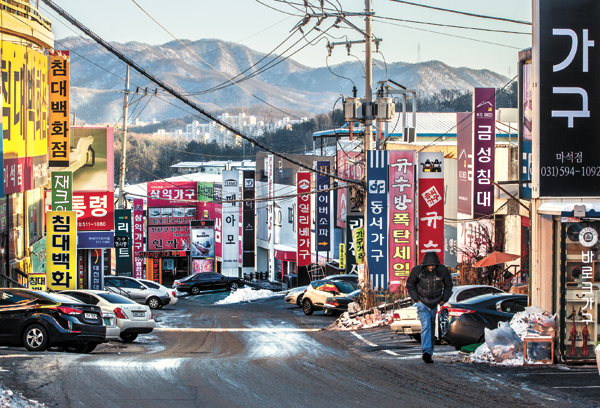 A street in the Maseok Furniture Complex in Namyangju, Gyeonggi, is deserted even on a weekend, formerly its busiest time of the week. By Park Sang-moon

In front of the gigantic blue and yellow building - the world’s largest Ikea store by floor size - hundreds of eager customers had to wait in line outside on its first Saturday. Nearly 50,000 people visited the store that weekend.

With retail behemoth Ikea finally opening its doors and cheap imports also available online, smaller independent furniture vendors are rapidly losing business and some are on the brink of collapse. Maseok is home to approximately 90 furniture stores, and more are based in other Gyeonggi cities such as Paju, Pocheon, Ilsan, Goyang and Gwangmyeong.

In the Gyeonggi province alone, 10,000 furniture stores are operated by a single owner. Bigger stores run by more than 10 people number 4,700. Put together, Gyeonggi’s furniture shops are estimated to account for about 60 percent of all small and midsize furniture shops in the nation, according to the Korea Furniture Association.

Ikea threatens them all.

“Things are not the same as compared to a few years ago,” Kim Yeon-hwan says at his large showroom, where a single customer browses. “I know several stores that went out of business in this section of the street because of poor sales.”

And Ikea is only part of the downward spiral of Maseok’s furniture street.

“People now compare the prices between furniture online and at physical stores,” he continues.

“And then, they keep the lowest price in mind and consider anything above that expensive. That happens even though the type and quality of the products are all different,” Kim says with a sigh.

Delivery and assembly fees are optional, so its products are cheaper than at stores that include those fees into the price tag.

Choi Jin-ok, who lives in Ansan, Gyeonggi, left one of the furniture stores without buying anything because she thought the prices were too expensive.

“The furniture was more expensive than the price ranges I saw on the Internet,” she said. “I am thinking about visiting Ikea because I heard there are a lot of products that are cheap.”

Shop owners at Maseok hardly know what hit them.

“Shop owners here fret about Ikea so much that some of them already went there in groups to get a sneak peek at what’s going on,” Kim says.

The Hana Institute of Finance estimated that the market share of Ikea in Korea will rise to 19 percent by 2020. The market size of Korea’s furniture industry was 8.5 trillion won ($7.6 billion) in 2012, according to the Korea Furniture Association.

According to a report by the Gyeonggi Research Institute, local furniture manufacturers and sellers will face a drop of up to 40 percent in sales due to Ikea.

The furniture district facing the most immediate danger is Gwangmyeong Furniture Complex, which is only seven kilometers away from Ikea.

A workers’ cooperative representing furniture retailers at the Gwangmyeong complex said that sales at the shopping venue radically dropped in recent months.

In December, total sales for the furniture district fell about 40 percent, the organization said.

“Ever since the news of Ikea’s opening was announced, we’ve seen a drastic decrease in the number of visitors,” Lee says.

He warned that Ikea will affect many other retailers beyond furniture suppliers, because the range of its products is vast.

“It carries food, toys, flowers and smaller household items on top of furniture,” he continues, “so it can have a negative impact on small restaurants and neighborhood supermarkets.”

Regardless of mounting concerns from local retailers, Ikea plans to open two more outlets, one in Goyang, Gyeonggi, and another one in the eastern part of Seoul.

When juggernauts like Ikea are pitted against small mom-and-pop stores, an emotional flashpoint is created. A retailers’ associations in Gyeonggi already expressed its fears in a private meeting with Gyeonggi Gov. Nam Kyung-pil.

When such David and Goliath conflicts break out, the Korean government tends to regulate the bigger players. One example is forcing big discount chains to close twice a month, though the effectiveness of such regulations is questioned.

But Ikea can skirt those regulations because it is categorized as a specialty store rather than a retailer.

So the Gyeonggi Provincial Government is looking for ways to help the existing furniture vendors.

The regional government and the Ministry of Trade, Industry and Energy decided to shell out 16.8 billion won to build a new furniture complex in Pocheon that can house furniture stores scattered across the district.

With a budget of 600 million won, Gyeonggi will also establish a furniture manufacturing center where young designers can make their products.

The government also promised to invite Gyeonggi’s small and medium furniture stores to display and sell their products at K-Fashion Design Village, a 700 billion won project aimed at setting up a fashion and cultural complex in the Gyeonggi region.

But furniture store owners and manufacturers said the response was long overdue.

“It was three years before Ikea announced its plans to set up a store in Korea,” says an official of an organization that represents furniture makers and sellers at Maseok.

“And everyone knew that it will come to the Gyeonggi area because of cheaper land cost than Seoul and proximity to the capital city. The government has tried to do something, but it’s too late and losses have already occurred,” the official says, requesting anonymity.

Bracing for the big box

Brands such as Hanssem and Hyundai Livart have changed their business strategies to distinguish themselves from Ikea.

Hanssem, the largest furniture manufacturer by sales, now tries to attract high-end customers who would find Ikea’s designs too generic.

Choi Yang-ha, Hanssem’s chairman, said that it will put resources into offering an integrated service that covers furniture selection, delivery and after-sales services.

Last year, it hired 20 percent more after-sales service engineers. The company’s new direction is most clearly reflected in the newly built flagship store in Mok-dong, eastern Seoul, which was intended to be a hub for Hanssem.

The Mokdong store, 20 minutes by car from the first Ikea store, opened its doors last March.

Located on 5,680 square meters (1.4 acres) of land, the store has two underground levels with displays of home furnishings and light furniture. It has six floors that display kitchen furniture, sofas, dining tables and beds - and a model house measuring 1,173 square feet equipped with a whole set of rooms and bathrooms just like a real house.

A significant portion of the flagship store is dedicated to premium sub-brands of Hanssem such as Kitchen Bach.

Boosted by the differentiation drive, sales of Hanssem reached a record high in 2013, breaking the 1 trillion won mark for the first time. Sales in 2013 stood at 6.9 billion won 1 trillion won, and the figure is expected to further grow last year.

The second biggest player, Livart, is also trying a different business strategy by jumping into a sector that Ikea is strong in. In September, Livart launched a new brand of children’s furniture named Livart Kids.

It said that the entire range of Livart Kids items is eco-friendly and made of materials that do not harm the human body.

The furniture company currently operates 29 Livart Kids stores and plans to expand to 150 by 2017.