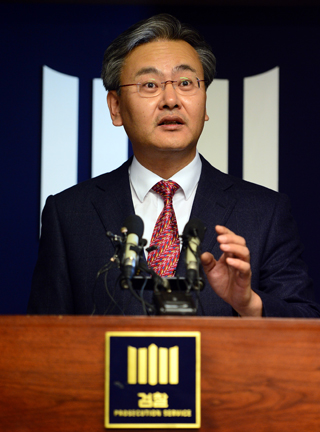 The leaked internal document that said a former aide to President Park Geun-hye was acting as a behind-the-scenes power broker at the Blue House was based on groundless rumors collected by a senior police officer seconded to the presidential office, the prosecution concluded Monday.

Unveiling the interim outcome of a monthlong probe into a case that has caused the Park administration its biggest political scandal, Yoo Sang-bum, a senior prosecutor at the Seoul Central District Prosecutors’ Office, said in a press briefing that Park Gwan-cheon, a senior police officer who worked until February at the Office of the Presidential Secretary for Civil Service Discipline, gathered the rumors to be included into a dozen different classified documents, including the leaked report.

He did so on the orders of his boss at the Blue House, Cho Eung-cheon, the former presidential secretary for civil service discipline, according to the prosecution.

On Monday, Cho was indicted without detention on charges of leaking confidential information and violating the Presidential Records Management Act.

Park, the police officer, was arrested and imprisoned on Dec. 19 on charges of also violating the Presidential Records Management Act.

“Chung Yoon-hoi gate,” named after the former aide of President Park from when she was a legislator, was triggered by an exclusive report on Nov. 28 by the local daily Segye Ilbo that quoted the document, which said that Chung had been discussing state affairs regularly with 10 Blue House officials and related figures, including the three presidential secretaries the report referred to as the “three doorknobs.”

The nickname means that they controlled access to the president.

The leaked report shocked the public and led to a plunge in President Park’s approval ratings. According to poll agency Realmeter, her ratings went from 50 percent in the third week of November to 39.7 percent in the second week of December, the lowest since she took office in February 2013.

Park’s ratings recovered to 44.8 percent as of Monday, largely due to anticipation that inter-Korean relations could improve in the new year.

The monthlong investigation of the case led prosecutors to the conclusion that Chung did not have meetings with Blue House figures nor did he exert any influence behind the scenes, according to the senior prosecutor, Yoo.

But it also uncovered many alleged activities of Cho and Park in the Office of the Presidential Secretary for Civil Service Discipline related to the president’s younger brother, Park Ji-man. The office usually investigates corruption in the bureaucracy.

One of duties of the Civil Service Discipline Office is to monitor the siblings of president in case they do something that could embarrass the president.

The prosecution’s probe revealed that Cho had Park Gwan-cheon deliver original copies of 17 different confidential Blue House documents to Park Ji-man, who is also chairman of EG Group, between June 2013 and January 2014.

Cho allegedly told prosecutors that he gave the documents to the president’s brother with the intention of “managing” Park Ji-man and his wife. But the fact that some documents dealt with Chung’s alleged misconduct behind the scenes led prosecutors to the assumption that Cho was trying “to take advantage of Park Ji-man to strengthen” his role or position by making him worry about Chung’s influence with the president.

The senior prosecutor also said an allegation raised by a weekly magazine report in March was fake. The allegation stated that the president’s brother had caught a motorcycle driver who was tailing him and persuaded him to write a statement saying Chung paid him to do so.

Both Chung and Park denied such an incident ever happened.

The essence of the scandal is a previously hidden power struggle between Chung and the president’s brother, analysts have said. Chung was seen as continuing to be a confidante of the president, as their relationship dates back to the 1990s when the president was a lawmaker. But Chung claims publicly that he severed contact with the president and her aides since 2004 and has “lived a hermit-like life” ever since.

Park Ji-man apparently has a much more complicated relationship with his older sister.

After both of his parents were assassinated during his adolescence, Ji-man was known to have substance abuse problems until he was rehabilitated in the early 2000s. He became an object of monitoring and containment for the fastidious president after she assumed her post. She has never invited her younger sister or brother to the Blue House and many assume Ji-man had grown frustrated by being distanced by his own sister and was jealous of Chung.

But some Blue House insiders say both Chung and Park were fighting against their own “ghosts,” overestimating each other’s influence with the president. But many unsolved mysteries linger.

The Blue House did not release any official statement on the prosecutors’ interim conclusion. But it jibed with the president’s own remarks on Dec. 7. “It is truly embarrassing that the entire country is rocked by rumors that only appear on jjirasi,” she said. Jjirasi is a term derived from a Japanese word that refers to unverified slander that circulates in a stock market.

The ruling Saenuri Party spokesman Park Dae-chul said in a briefing that the scandal disclosed two different side effects of jjirasi. The first was that pure rumors can find themselves in a confidential document written at the Blue House. The second was that the leaking of a document filled with rumors defamed an individual and stirred controversy in society.

“I can’t help feeling despair that goes beyond rage that [the country] has been swayed by a transparent ghost,” Park said.

He went on to attack the main opposition New Politics Alliance for Democracy (NPAD) for failing to uncover any “truth” out of a flurry of suspicions it raised earlier.

The NPAD said in response that the prosecution’s announcement amounted to an “exoneration” of heavyweights at the Blue House.