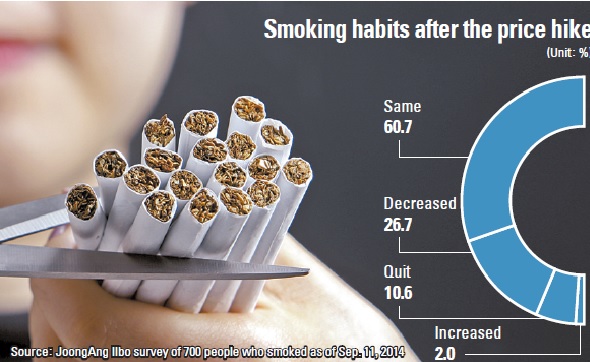 Mr. Choi decided to quit smoking this year. The 29-year-old, a dentist who resides in Guri, Gyeonggi, said he has smoked two-thirds of a pack every day for nearly 10 years but hadn’t lit up for four days as of Sunday.

“I’ve considered quitting from time to time for health reasons, but I’m giving it a shot because of the price increase, and more places have been designated non-smoking areas,” he said. “I desperately want to smoke once or twice a day, and I brush my teeth or eat candy. I’m planning to visit a tobacco cessation clinic and get nicotine patches sooner or later.”

For many, like Choi, the stiff 2,000 won ($1.80) increase in the cost of cigarettes this year has had a noticeable effect. In a survey conducted by the JoongAng Ilbo of 700 smokers, 63.9 percent answered that they had either already stopped smoking or plan to quit.

Respondents were those who still smoked as of Sept. 11, the day the government announced the markup. The poll was conducted over three days from Tuesday to Thursday.

Of those who quit or plan to quit smoking, the majority, 75.6 percent, cited the price hike as their primary motivation among the multiple answers allowed. That was followed by “health reasons” (57.7 percent), “recommended by family or friends” (14.2 percent) and “expanded no-smoking zones (10.5 percent).

The increased cost of cigarettes also appears to be affecting more people in the lower income bracket. Of those who earn a million won a month or less, 68.4 percent have stopped or are considering quitting, while 71.2 percent of those who earn 1 to 2 million won monthly are doing the same.

Of those surveyed, 10.6 percent had quit smoking sometime between the price increase announcement in September and Jan. 1, when it was implemented. Another 26.7 percent answered that they had reduced the number of cigarettes they smoked per day.

When those who chose not to quit smoking were asked why, among multiple answers allowed, 54.6 percent answered that they had tried but failed, and 42.4 percent said they could not focus on work without taking smoke breaks.

Smoking is addictive and often difficult to stop without some form of assistance, and public health centers provide free services encouraging smokers to quit. Private hospitals and clinics will also provide similar assistance starting in February, during which the National Health Insurance Service will cover the total cost of a 12-week program that includes six free consultations.

Patients may take part in the program for free up to two times.

The government will also cover 30 to 70 percent of the expenses for smoking substitutes - gums, patches, candies - for patients for four weeks of the 12-week program.

“It helps a lot if they [smokers] use nicotine substitutes like gums, pills or patches when they see doctors,” said Seo Hong-gwan, a professor at the National Cancer Center. “When they experience severe withdrawal symptoms, patients are usually prescribed bupropion or varenicline, and about 40 percent of them succeed in quitting.”