Goalie proves that he’s worth keeping around

Goalie proves that he’s worth keeping around 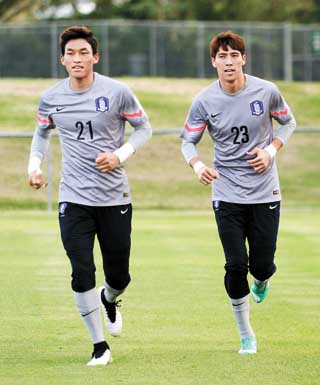 Goalies Kim Seung-gyu, left, and Kim Jin-hyeon run during training on Monday in Sydney. Kim Jin-hyeon, who had an outstanding performance on Sunday, is another contender for the team’s starting keeper. [NEWSIS]

The national football team’s third-option goalie Kim Jin-hyeon has had a great start to 2015 after he impressed fans with his performance in Sunday’s friendly against Saudi Arabia and renewed his contract with his club Cerezo Osaka on Tuesday.

The Japanese team announced on its website Tuesday that it had agreed to sign the 27-year-old goalie without disclosing the length of the contract. Kim became Korea’s first goalkeeper to play on a foreign team when he began his career with Cerezo in 2009. Even after the team was relegated to the second-tier league last year, Kim chose to stay in Osaka.

The keeper made his mark after keeping the first half scoreless against Saudi Arabia. He showed exceptional skill in the match, especially when he punched away a bicycle kick by Nawaf Al Abed in the 28th minute. He was replaced by Kim Seung-gyu at halftime.

Kim Jin-hyeon has started in three out of the five friendly matches the Taegeuk Warriors have played under their new manager, Uli Stielike, who took up his post in September. Before Stielike, only Jung Sung-ryong and Kim Seung-gyu, who became famous during the World Cup last summer, competed for the starting slot. But Kim Jin-hyeon has since been added to the rotation, and he seems to have become the German manager’s preferred option.

Kim is known not just for his stable defense but also for his ability to accurately get the ball to his teammates.

“I wanted to show that I can defend well but also give good passes,” said Kim.

“After joining the team, I feel that my efforts have finally paid off.”

The 6-foot-4 goalie is the tallest member of the national team. He said he started playing keeper in fifth grade because he was so tall. He was the regular starting goalie on the under-20 national team in 2007 and joined Cerezo the next year. Kim then helped that team, which was in the second-tier league at the time, get kicked up into the first tier by only giving up 0.98 goals per match in his first season.

He first played with the regular national team in 2011 for the Asian Cup but never made it into a match, and he failed to make it onto the roster for the Brazil World Cup.

“That was all because I wasn’t good enough,” Kim said. “But that experience helped me mature.”

After failing to make the World Cup team, he practiced even harder. The keeper said he has focused on the basics and has paid particular attention to ball-handling skills.

“I was too young to really understand what was going on in the previous Asian Cup four years ago, but it is different now,” he said.

“I want to be called Korea’s Manuel Neuer because he is not just a great goalie but because he has changed fans’ attitudes toward goalkeepers. I also want to prove that I’m as good as Neuer.”