Foreign reserves snap out of slump and rise

Foreign reserves snap out of slump and rise 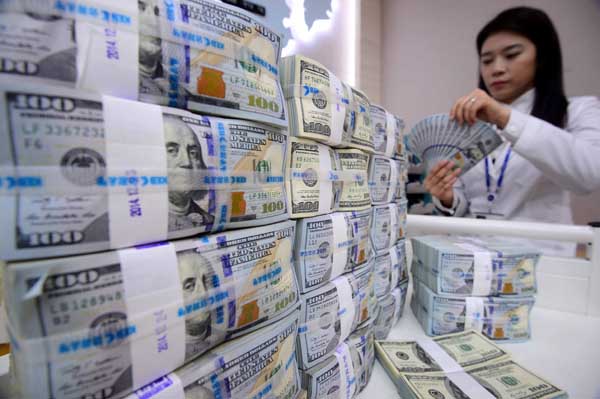 An employee of the Korea Exchange Bank in central Seoul counts foreign currency. The nation’s foreign reserves grew in December.[NEWSIS]

Foreign reserves grew moderately last month as the central bank made changes to its investments.

According to the Bank of Korea on Tuesday, foreign reserve holdings as of December were $363.6 billion. That’s a $500 million increase from the previous month, or 0.14 percent.

When compared to a year ago the foreign reserves were $1.7 million larger, or 5 percent.

The nation’s foreign reserves enjoyed a 13-month string of broken records that ended in August. After hitting an all-time high of $368 billion in July, reserves turned around in August and fell through November. The central bank said the foreign reserve fell largely because the value of other currencies in its portfolio, including the euro and British pound, saw their values fall against the U.S. greenback. 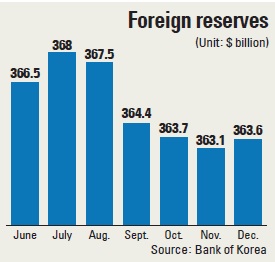 Although in December the U.S. dollar continued to strengthen against such currencies, foreign reserves grew because the Korean central bank reduced currency holdings and increased securities, including treasury investments.

In the case of treasury investments, profits rose thanks to the drop in interest rates in the global market.

Securities holdings added $101.4 trillion from the previous month to total $341.7 billion, while cash deposits were reduced by $9.3 billion to under $12 billion.

As of November, Korea had the seventh-largest foreign reserves in the world. The top position is taken up by China’s $3.89 trillion.