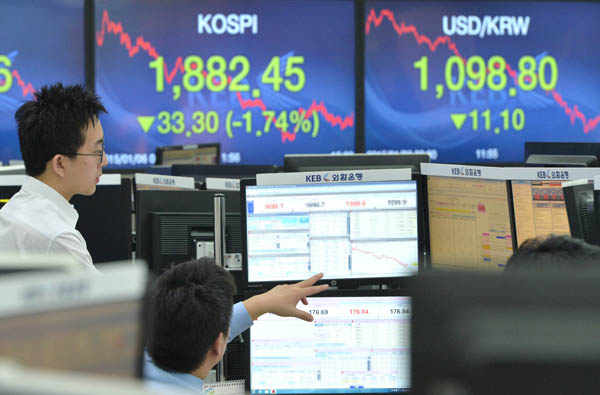 A signboard at the Korea Exchange shows the Kospi closing at its lowest level in 16 months amid rising concerns over the falling price of crude and eurozone risks. [NEWSIS]

Concerns over the falling price of crude and the rising possibility that Greece will exit the European Union led Korea’s main bourse to close at its lowest level in 16 months, at 1,882.45.

The panic started as soon as the market opened at 9 a.m., when more than 20 points was lost immediately. As the day progressed, the index was down more than 30 points and did not recover before its 3 p.m. close at 1,882.45, down 1.74 percent compared to the previous trading day.

One of the biggest contributors was the sharp fall in crude prices.

The oil price was below $50 per barrel for the first time since 2009. The West Texas Intermediate (WTI) crude oil price dropped 5 percent overnight in the United States due to worries of oversupply against production of American shale oil and a strong dollar. Due to an overall drop in American-based oil and energy shares, three major U.S.-based stock indexes stayed low. Dow Jones dropped 1.86 percent, S&P 500 dropped 1.83 percent and Nasdaq 1.57 percent.

European stock markets in Germany, the U.K. and France dropped at least 2 percent ahead the Greek elections on Jan. 25, because Greece’s withdrawal could result in the country’s default. The Greek stock market dropped 5.63 percent overnight.

Local retail investors net purchased 273 billion won, but not enough to stop the Kospi from dropping.

However, analysts have said that although cheaper crude is hurting the stock market in the short-term, it will have a positive affect on the economy in the long run.

According to data compiled by the Bank of America and Merrill Lynch, Korea’s gross domestic product is expected to rise 0.45 percent and consumer prices are expected to drop 0.25 percent, with every 10 percent drop of international oil price, the Wall Street Journal reported on Sunday.

The report added the lower international oil price will boost growth in most Asian economies. In addition to Korea, other heavy oil importers, such as China, Japan and Taiwan, will also see 0.45 precent GDP growth.

Local analysts said falling oil prices will help the Korean economy’s revival by improving consumer sentiment, which has been low since the sinking of the Sewol ferry last year.

“It has now become more difficult than ever to predict where the oil price will go between $50 and $60,” wrote Lee Kyung-soo, a researcher at Shinhan Investment, in a stock market report on Tuesday. “Of course, we certainly have to keep in mind that there could be financial risks following the drop in oil prices, but this will definitely boost consumer sentiment, which will eventually help local businesses.”