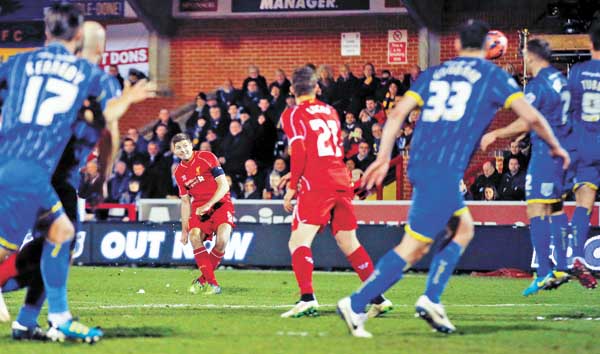 Liverpool’s Steven Gerrard, left, scores his second goal from a direct free kick during an FA Cup third-round match between AFC Wimbledon and Liverpool in London on Monday.[AP/NEWSIS]

Steven Gerrard gave Liverpool fans an instant reminder of what they’ll be missing next season.

Playing in his first game since announcing he will leave the club this summer, Gerrard scored twice to give Liverpool a surprisingly hard-fought 2-1 win over fourth-tier Wimbledon on Monday in the third round of the FA Cup.

Liverpool’s longtime captain curled in a trademark free kick in the 62nd minute to secure the win against a tenacious and ambitious Wimbledon side.

Gerrard had put his team ahead with a header in the 12th minute, but Adebayo Akinfenwa gave the hosts a deserved equalizer in the 36th by tapping in after goalkeeper Simon Mignolet failed to clear a corner.

“I always enjoy the FA Cup,’’ said Gerrard, who announced last week that he’ll be leaving Liverpool after a 17-year career to join Major League Soccer. “I grew up loving the competition and as it’s going to be my last time, I want to make the most of it and try and go all the way.’’

In Monday’s other game, Burnley held Tottenham to a 1-1 draw to force a replay between the Premier League sides.

Sam Vokes scored his first goal since last March following a knee injury to equalize for the host in the 73rd minute after Nacer Chadli had put Tottenham ahead in the 56th.

The game was a repeat of the 1962 FA Cup final, won 3-1 by Tottenham, while the other game conjured up memories of the 1988 final when Wimbledon FC beat then-dominant Liverpool 1-0. The result is widely considered one of the great shocks in FA Cup history.

Monday’s opponent, AFC Wimbledon, was formed in 2002 after a committee appointed by England’s Football Association granted permission to Wimbledon FC to relocate to the town of Milton Keynes about 100 kilometers (62 miles) away.

Liverpool will play Bolton at home in the fourth round later this month, while Leicester awaits the winner of Tottenham-Burnley.