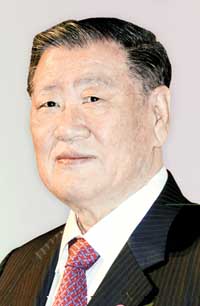 Hyundai Motor Group is planning to make its largest investments ever.

The group announced Tuesday that it will invest 80.7 trillion won ($73.2 billion) through 2018 to clinch the twin goals of selling nine million cars and becoming a leader in the world’s eco-friendly and smart car industries.

The goals were set by the 77-year-old chairman, Chung Mong-koo, in a New Year’s address.

The automaker will be investing roughly 20 trillion won every year for the next four years. This would be roughly 35 percent more than the largest annual investment the company has made, which was 14.9 trillion won last year. 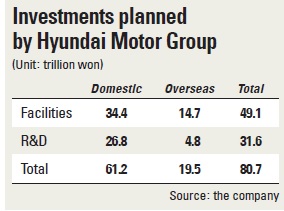 Hyundai Motor’s annual investments will be bigger than the 18.9 trillion won the Korean government has set aside for research and development this year, the company added.

“The group’s total revenues in 2013 were about 158 trillion won,” Hwang Kwan-sik, spokesman of Hyundai Motor, told the Korea JoongAng Daily. “And since our net profit for that year was about 14.7 trillion won, investing about 20 trillion won per year isn’t a hard thing to do.”

Of the 80 trillion won, 49 trillion won will be spent on expanding facilities including building more factories to boost capacity and developing the Global Business Center (GBC), the group’s new headquarters and future business hub to be built in Samseong-dong, southern Seoul.

The remaining 31 trillion won will be spent on research and development to invent new technologies for next-generation vehicles.

“We aim to improve the overall quality of our vehicles,” Hyundai said in a statement. “We also wanted to provide a new growth engine and strengthen our brand value.”

The company said new factories for parts and materials including engines, transmissions and power trains will be built in areas close to Ulsan in South Gyeongsang, Hwaseong in Gyeonggi and Seosan in South Chungcheong, where the production lines of Hyundai Motor and Kia Motors are located.

It will also develop new factories in China and Mexico to improve their competitiveness in core overseas markets such as China and the United States. Hyundai Motor and Kia Motors last year sold 1.3 million units, a 4 percent rise from 1.25 million units a year earlier.

Considering that most Japanese automakers including Nissan, Toyota and Honda lowered their prices because of the weak yen, industry insiders said the two did a decent job last year.

“Our strategy of strengthening our brand marketing - keeping the 10-year or 100,000 kilometer warranty program instead of offering unreasonable discounts - worked out well,” said a spokesman of Hyundai.

Kia will build a factory that can produce about 300,000 cars a year in Monterrey, Mexico, which is about 200 kilometers (about 120 miles) away from Texas, by the end of next year.

The two brands will also invest in high-quality car materials. Hyundai Motor said it will develop diverse types of car steel sheets, including high-intensity steel sheets and lighter steel sheets, as part of its plans to make vehicles with high fuel efficiency.

In order to improve the brand value of Hyundai Motor Group, it will not waste time in building its center in Gangnam District. The company said it will spend about 11 trillion won including the land purchase price and construction costs for a 105-story building. About 4,225 workers will be hired by 2018 for the project. The site, which is about 79,000 square meters (19 acres), will ultimately include the company’s new headquarters, an automotive theme park, a hotel, a shopping center and an exhibition hall.

The company also will invest on R&D to develop plug-in hybrids, hybrids and hydrogen-fueled vehicles. The company said it will invest about 2 trillion won on developing smart cars and related technologies including driverless driving systems. The company will hire 7,345 employees in R&D in the next four years. A new research lab will be built in the Namyang Research Institute, Hyundai Motor’s main R&D center.