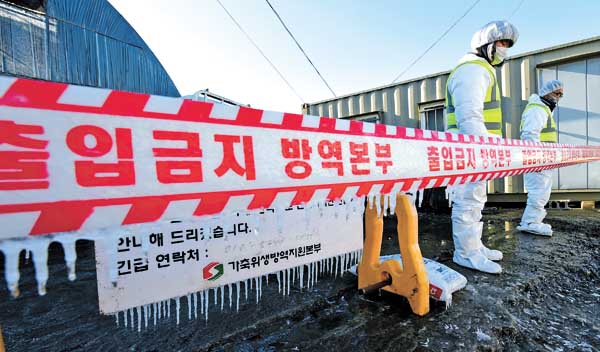 Quarantine officials block access to a cattle farm in Anseong, Gyeonggi, after foot-and-mouth disease was confirmed in a cow there Tuesday. [NEWSIS]

A case of foot-and-mouth disease (FMD) was confirmed Tuesday by local authorities in a cow in Anseong, Gyeonggi, the first time in four years that the highly contagious disease has infected a cow.

The latest case of FMD, a fatal virus that affects cloven-hoofed animals, comes as the country is struggling to control a winter outbreak of the disease among pigs that dates back to Dec. 4, when a hog farm in Jincheon County, North Chungcheong, reported the first case.

So far, more than 26,000 pigs from at least 34 farms nationwide have been culled.

The closest case to Seoul was in Yongin, Gyeonggi, when two hog farms were confirmed by the Gyeonggi Provincial Office on Tuesday to have been hit with the disease. 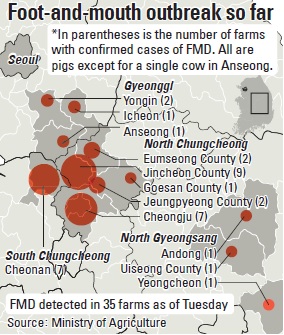 Of the 2,390 pigs at the two Yongin farms, FMD symptoms were exhibited by 23 pigs. Gyeonggi officials said Tuesday that only the pigs that were infected have been culled. The rest will be monitored for signs of infection.

On the cattle farm in Anseong, only one of 47 cattle has been infected. It was the only animal slaughtered.

There are roughly 390,000 pigs and cattle in Anseong all together.

The Ministry of Agriculture, Food and Rural Affairs implied in its statement that the possibility of the virus spreading nationwide among cattle is low given the fact that the serotype of the virus found Tuesday was Type O, which the South Korean government has obtained vaccines against.

Although the ministry said the disease does not affect humans, local farmers are dreading a reoccurrence of the country’s worst FMD disaster between November 2010 and April 2011, when the virus spread throughout most of the country. It cost the country 3 trillion won to cull some 3.5 million animals.

The Agricultural Ministry relayed plans to beef up preventive measures Monday, saying in a press conference that “livestock-related traffic” will be restricted throughout the entire country starting Wednesday.

“In the case of Yeongcheon, North Gyeongsang, we’re close to the conclusion that the area was contaminated [by FMD] through a shipping vehicle leaving a slaughterhouse,” said Lee Jun-won, the assistant deputy minister of the Ministry of Agriculture.

“We also think [the disease spread to] Andong and Uiseong in the same way,” added Lee.

At least 1,200 pigs in Yeongcheon were slaughtered when the first case of FMD was discovered there on Dec. 30.