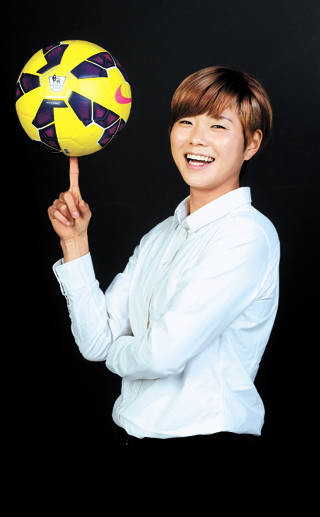 The women’s national football team qualified for the Women’s World Cup in June for the second time ever. In the 2003 U.S. competition, South Korea lost all three of its group matches against Brazil, France and Norway, and did not advance.

Jeon Ga-eul, an attacking midfielder, might be the most excited about the upcoming competition in Canada. Jeon was named MVP of the WK-League in 2010 after leading her club, Suwon FMC, to the top of the league. But she has not performed as well since moving to the Hyundai Steel Red Angels the following year.

Jeon said in an interview with the JoongAng Ilbo on Dec. 30 that she used to be “complacent and did not try hard enough.” But after watching Ji So-yun and Park Eun-sun rise to become stars on the national team, Jeon made up her mind to improve her fitness. She worked so hard that even her coaches became worried that she was overworking herself too much. She sees the Canada World Cup as her chance to prove herself.

Though she isn’t as famous as Ji or Park, Jeon is often called the female Park Ji-sung. She plays in the same position, has his same number (7), and like him, she constantly moves throughout the match, sending accurate passes to her teammates and also making threatening attempts on goal.

Q. You must have worked hard on your fitness.

A. I’m planning to work even harder in 2015, and my only concern is to win in the World Cup. Since I began weight training six months ago, I brought a bicycle and dumbbells to the training center and worked out for an hour or two every day.

I eat eggs and drink protein shakes to build up my muscles and do not eat anything made of flour. When my condition was at its best right before the Asian Games, my body fat percentage marked 6 percent.

Do you feel your physical abilities improving?

I feel powerful when I’m running, and my speed, power and balance are a lot better as compared to the past. That’s why I recommend weight training to other players.

But I did go at it too hard, so I couldn’t even lift three dumbbells because of the pain in my wrist. But when I rested for a few days, I felt as though my body was getting heavier. So I taped my wrist and began training again. A coach even begged me to stop.

How did you begin playing football?

I started off as a table tennis player at first. My father used to take me to a table tennis club from time to time and I got good enough to beat all the adults at the club.

But I got a fracture in my elbow when I was in fifth grade and started playing football instead with the boys. Then the coach of the school football team recommended that I join, so that’s how I began football. I was the only girl on the team and I made my dad’s dream come true because he also dreamed of becoming a football player.

You said your favorite player is Cristiano Ronaldo.

I was impressed by his playing when he was at Manchester United and I was a middle school student. Also, he donates a lot of his money and does not tattoo his body so that he can donate blood. I also want to become a player that writes thank-you letters to coaching staff just like him.

What is your goal as a footballer?

I have dreamed of becoming a World Cup champion before I retire, but I have become more realistic now. I hope to make it into the quarterfinals, and then I think we might have a chance to win the competition. We talk about this year’s World Cup every time the national team assembles. And I believe Manager Yoon Deok-yeo will lead us.

I have constant pain in my ankle and doctors advised me to have surgery, but I’m not having it before the World Cup. I admit that I’m crazy about football.