Suns cool off some, but beat Bucks

Suns cool off some, but beat Bucks 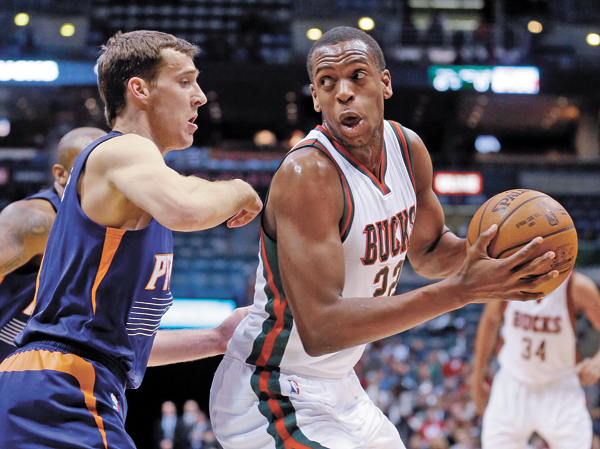 Milwaukee’s Khris Middleton tries to drive on Goran Dragic of the Phoenix Suns during the first half of their game on Tuesday, local time, in Milwaukee. [AP/NEWSIS]

After the team’s second-highest point total of the season on Sunday, there was no chance of a letdown for the Phoenix Suns.

Markieff Morris scored 26 points and grabbed 10 rebounds to lead the Suns to a 102-96 victory over the Milwaukee Bucks on Tuesday night, local time.

A bright spot for the Bucks was the return of center Larry Sanders, even if he was sitting on the bench in street clothes. He missed his seventh consecutive game due, at first, to the flu, but since then for personal reasons.

“It feels great to be around the guys again,’’ Sanders said. His last game was Dec. 23, and he denied rumors he might even quit basketball.

“But what is true,’’ he said, “is that I’m in the process of working things out now to do what’s best for my psyche and my physical health going forward. There’s a lot of evaluating going on.’’

Facing the Bucks, who beat them, 96-94, six weeks ago on Khris Middleton’s buzzer-beating 3-pointer, the Suns still had plenty of energy and drive.

Isaiah Thomas added 19 and Goran Dragic, 16, for the Suns, who scored 100 or more points for the ninth straight game.

“It wasn’t the prettiest game,’’ said Suns Coach Jeff Hornacek. “There were a lot of turnovers and a lot of missed shots, but we got it going a little bit in the second half, scoring 59 points. We played more like we were capable of playing.’’

The Bucks turned the Suns’ 20 turnovers into 22 points, while Phoenix cashed in on Milwaukee’s 17 miscues for 16.

Phoenix shot 40 percent in the first half, falling behind Milwaukee by 10, but then recovered and went 51 percent from the floor in the second.

“Our guys made big plays at the end,’’ Hornacek said.

After three lead changes and a tie to start the fourth quarter, the Suns went ahead for good when Markieff Morris kept an offensive rebound alive and tipped it in and Marcus Morris converted a 3-point play for an 81-76 lead early in the quarter.

Phoenix capitalized on Milwaukee’s poor shooting to cling to a lead that was never more than seven points down the stretch. The Bucks made nine of 27 shots in the fourth quarter, and their defense disappeared.

“You can’t give them wide open threes late in the game,’’ said Bucks Coach Jason Kidd.

“We got key stops and scored on the offensive end,” said Thomas. “We stayed aggressive and got in the bonus with about four or five minutes left in the game. That’s what got us the win.’’

Brandon Knight scored 26 and Giannis Antetokounmpo added 16 for the Bucks, who lost their fourth straight game at home.

The Suns have won nine of the last 11 and opened the four-game road trip with their third consecutive victory. They also upped their record to 8-1 over Eastern Conference opponents.

Khris Middleton’s 3-pointer with 1:49 left got the Bucks to 94-92, but the Suns pulled away on a jumper by Goran Dragic, a 3-pointer by Markieff Morris and a free throw from Thomas.

Antetokounmpo and Knight put some energy back in the Bucks’ offense when each dunked during a 12-4 surge that put Milwaukee back in the lead, 62-58, with 4:44 left in the third quarter. 