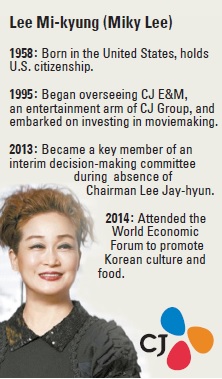 Lee Mi-kyung, vice president of CJ, has recently withdrawn from the company’s management and stays in the United States, according to sources contacted by the JoongAng Ilbo.

Also known by her Western name Miky Lee, the 57-year-old wielded powerful influence on the country’s 14th-largest conglomerate, which centers on entertainment, retail and food.

Ever since her brother Lee Jay-hyun, chairman of CJ, was put on trial on charges of tax evasion and embezzlement, she was believed to have shouldered a larger share of responsibility in the company.

But she has taken a backseat, staying in Laguna Beach, California, according to a source who holds a high-ranking position at the company with knowledge of the matter.

Her relegation was caused by the order of Sohn Bok-nam, mother of Lee and chief adviser of the group, because the daughter helped her close aide engage in influence-peddling and consequently exerted a negative impact on CJ’s corporate culture.

The aide in question is Noh Hee-young, a former executive director at CJ’s brand communication team.

It was widely believed that Lee inserted Noh in a top position with responsibility for devising a core business strategy.

But the prosecution said in June that the 51-year-old woman who made her name as a cook is suspected of having evaded 500 million won ($454,500) in taxes through fake invoices issued by her consulting firm.

Noh was one of the outside figures hired during Chairman Lee’s absence. They were recruited to fill the management vacuum, but some company executives often expressed their concerns.

Sohn was one of them.

“It won’t be easy for Lee [Mi-kyung] to come back,” said a source who spoke on the condition of anonymity. “But she is still involved in the sectors that she was passionate about, such as CJ E&M.”

The chairman’s imprisonment has been suspended due to his deteriorating health, and his cousin Sohn Kyung-shik is the interim chairman.

“This is going to be the year that employees should take a more active role than any other time,” Sohn said in a New Year’s address. “Since we have a varied business portfolio, let’s contribute to the creative economy.”

Chairman Lee also conveyed his message through Sohn, encouraging employees to achieve the goal of annual earnings of 100 trillion won ($90.8 billion) and operating profit of more than 10 trillion won by 2020.