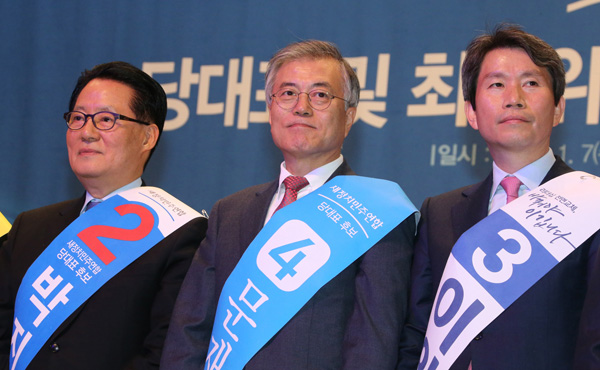 Park Jie-won, left, Moon Jae-in, center, and Lee In-young made the cut to run in the New Politics Alliance for Democracy’s race for chairman. [NEWSIS]

Lawmakers Moon Jae-in and Park Jie-won made the cut to run in the race for the chairmanship of the New Politics Alliance for Democracy (NPAD), taking two of the top three spots on Wednesday in a primary.

NPAD Rep. Lee In-young also secured a position in the run-up to the party convention on Feb. 8, when Korea’s main opposition party will elect its chairman and five supreme council members to take the reins in 2015.

The NPAD party did not disclose how many votes each contender pulled or how they ranked, in line with party convention rules.

Smooth victories for Moon and Park, who respectively served as the presidential chiefs of staff under the Roh Moo-hyun and Kim Dae-jung governments, were widely anticipated before the vote Wednesday.

Moon’s bid for the NPAD chairmanship is largely viewed to be a resumption of his political aspirations two years after he was defeated by Park Geun-hye, his Saenuri rival in the 2012 presidential election.

The past two years of his term as a lawmaker have been mostly quiet.

In an address before hundreds of fellow lawmakers and supporters on Wednesday, he warned that the ruling Saenuri Party would sweep every district in Seoul if the NPAD didn’t change. He also pledged to put his political career on the line for the sake of reviving the party he described as having “a mere 20 percent public approval rating.”

Similarly, Park promised he would lead a party that could realize the demands of its members and win the general election in 2016.

Among those who did not make cut were Cho Kyuong-tae and Park Joo-sun, who dropped out of the race.

Both launched stinging criticisms of Moon during their campaigns before the primary, claiming the former presidential candidate should reflect over the reasons for his defeat in 2012, rather than bid for the party’s top post and blaming its heavy factional in-fighting on Moon.

The mudslinging among the five nominees prior to the primary - which was mainly targeted at Moon - again exposed the internal strife rampant among the NPAD’s varying factional lines.

Facing increasing attacks from his fellow party members, Moon vowed not to wage a negative campaign against his opponents.

With its public approval rating hovering just around the 20 percent range with no sign of rebounding, the election of its party leader next month is considered crucial.

The party, which has been managed by an emergency committee since its overwhelming defeat in the July by-election, fears that it’s running the risk of losing a significant number of Assembly seats to the ruling Saenuri in the general elections next year.