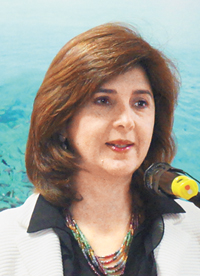 Maria Angela Holguin, the Colombian minister of foreign affairs, expressed optimism about the progress made in the country’s free trade agreement with Korea during her visit here on Wednesday, less than a month after Columbia’s Congress approved the agreement.

The move comes nearly two years after the two countries secured the deal in February 2013, largely due to strong opposition from the South American nation’s auto industry, whose workers would be most affected.

“When the president of Colombia, Juan Manuel Santos, visited Korea two years ago, the main purpose of the visit was to negotiate the FTA with Korea,” Holguin said.

“And I came here to Korea to express Colombia’s active efforts to push the Korea-Colombia FTA. Although it needs approval from the Constitutional Court, it is projected that the agreement will take effect in a few months.”

Despite domestic concerns, Holguin said Colombia will work to solve outstanding issues like unemployment through dialogue with industry experts.

Once the FTA takes effect, Korean companies will benefit from the business expansion overseas, where they can easily take advantage of Colombia’s geological position as the nation borders both the Pacific and Atlantic oceans.

“We hope Colombia becomes a platform to Korea in terms of industrial and business expansion,” the minister said.

Korea is an ideal country for an FTA, she continued, particularly because it sets a good example as a country that was once impoverished and quickly rose to become an acclaimed global economic power.

Historically, Colombia has special ties with Korea, being the sole country in South America that dispatched military troops after the outbreak of the 1950-53 Korean War.