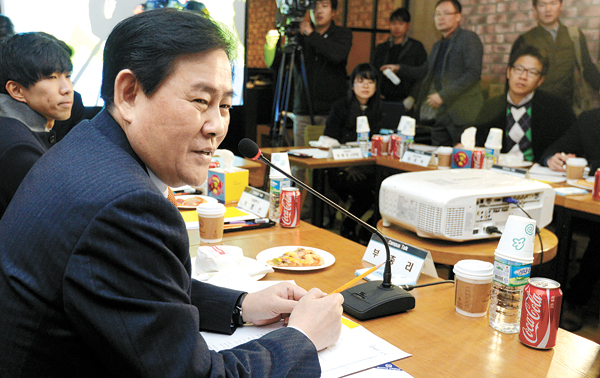 Minister of Strategy and Finance Choi Kyung-hwan speaks during a casual talk with students on Thursday at Chungnam National University in Daejeon. Choi discussed the job market and explained the government’s policies to help young people.[NEWSIS]

Finance Minister and Deputy Prime Minister for the Economy Choi Kyung-hwan said that if he was a college student, he would ask the government for stronger deregulations on service industries as a solution for job creation.

Choi visited Chungnam National University in Daejeon on Thursday afternoon for a casual talk with college students to listen to their concerns and clarify how his economic policies could actually help them join the work force.

“Young people these days prefer working in the service sector, from medicine, tourism, content creation and finance,” Choi said. “However, entry regulations make it difficult to start a business in this area. This eventually makes it difficult for companies to hire people.

I hope you don’t approach this [job creation] as an issue of ideology. I wish you would request that we carry out deregulations after thinking about how the deregulatory measures [on businesses] are related to job creation,” the minister added.

Finance Ministry officials brought pizza and burgers to the lunchtime roundtable to appease students, but the event was more of a policy briefing than a discussion. Few of the students’ questions were answered, and Choi spent most of the time convincing the young attendees that his policies would benefit them.

Choi’s visit to the college on Thursday attracted more public attention than usual because the move came after angry students protested his economic policies by putting up large posters on message boards at two Seoul college campuses. One of the posters was a formatted as a fake economics test taken by Choi, and the author had given the minister an F.

The sign was put up after the Finance Ministry announced last month that it would overhaul the employment system, which Choi said “excessively protects regular workers.”

The college students wrote on the posters that young people want jobs as regular workers with stable jobs and salaries, not as contract workers who have less job stability.

Choi emphasized that he has been harshly criticized by civil servants and labor unions since the ministry announced its labor reforms, including pension reform and more contract positions. The ministry said last month that it wants to create more contract worker positions but with better benefits than those workers receive now.

However, Choi maintained that the changes would benefit future generations.

“The civil servant pension system needs an extra 55 trillion won over the next 10 years to keep providing the promised amount of pension payments,” he said. “And all this money has to come from your own pocket, from your taxes. I didn’t want to put this burden on you, so we started pushing for the reform.”

As for the labor overhaul, the minister explained that the overall quality of jobs can’t be improved without changing regular workers’ benefits.

“I have been severely criticized by the labor unions, but this is inevitable,” he said. “If we get rid of all temporary positions under contracts, companies won’t hire anyone. That’s why we’re trying to implement a peak wage system, which will close any unreasonable wage gaps between regular and contract workers.”

Under the new wage system, regular workers’ retirement age is extended but their working hours and salary are reduced.

One student asked Choi how the government would help create jobs if Korean companies can’t afford higher personnel costs. Choi responded that it was the private sector’s job to create quality jobs because the only thing the government can do is ease regulations to boost private-sector investments.

“The key solution [to job creation] is private-sector investment,” he said. “The government’s role is to form a better business environment.”