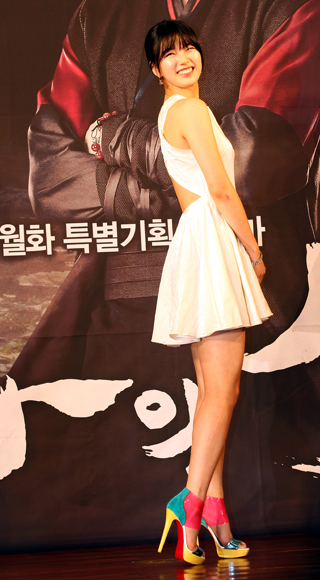 In a series of photos shared by the film’s promotion team on Thursday, Suzy was seen dressed in a hanbok, or a traditional Korean dress, and her hair was braided.

In the period film set in the Joseon Dynasty (1392-1910), Suzy plays the role of Jin Chae-sun, a student who learns pansori, or traditional narrative singing, from her teacher (Ryu Seung-ryong).

Although Suzy is one of the hottest stars in acting and singing, the film was said to be a challenge for her because she had to learn pansori.

“I’m so happy that I can wrap up shooting and that nobody got hurt during the production,” said the 21-year-old singer and actor through a press release.

The film’s actors and production team traveled to many parts of Korea over the past four months.

“It was hard to live as Jin Chae-sun, but I was happy. I tried hard to show a new side of me through this film,” Suzy added in the release.

The film is expected to come out by the end of the year.

Having debuted in 2012 as a member of girl group Miss A, Suzy has released numerous albums as part of the band and has also starred in films such as “Architecture 101” (2012) and drama series like “Gu Family Book” (2013).