Rockets zoom past the LeBron-less Cavaliers

Rockets zoom past the LeBron-less Cavaliers 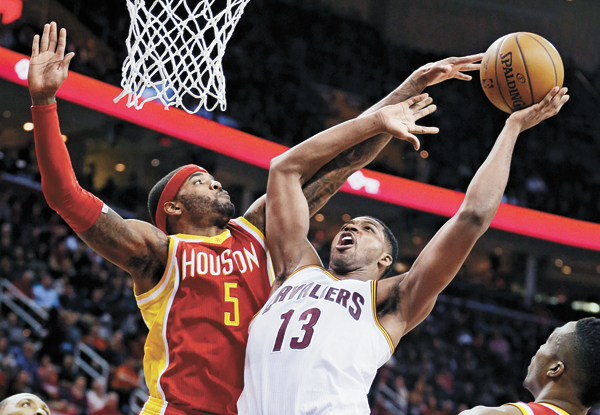 The Cavaliers’ Tristan Thompson is fouled by Houston’s Josh Smith during the fourth quarter of their game on Wednesday, local time, in Cleveland. The Rockets defeated the Cavaliers, 105-93.[AP/NEWSIS]

All Houston Coach Kevin McHale had to do was remind Dwight Howard that the Cavaliers didn’t have a center to stop him.

Once he did, the Cavaliers didn’t have a chance, either.

Howard grabbed eight of his 19 rebounds in the decisive fourth quarter and James Harden scored 21 points as the Rockets roared to a 105-93 win Wednesday night over the Cavs, who played their sixth straight game without LeBron James.

The Rockets broke away with a 15-5 run in the fourth and handed the Cavs their seventh loss in nine games. Corey Brewer made a pair of 3-pointers and scored eight consecutive points in Houston’s spree.

But it was Howard who made the biggest difference. He dominated at both ends, scoring nine of his 17 points in the final 12 minutes while imposing his will on the Cavs.

“The whole game changed when Dwight just got every rebound,’’ McHale said. “They were beating us up on the boards. We were complaining a lot in the huddle about us being better on the boards. He probably took it to heart.”

Kyrie Irving scored a season-high 38 and Kevin Love added 17 points and 16 rebounds for the Cavs, who lost their fourth straight at home. J.R. Smith went scoreless in 19 minutes in his Cleveland debut. The unpredictable guard was acquired earlier in the week from the Knicks along with guard Iman Shumpert.

James said he’s on target to return in a week from a strained back and left knee.

The Cavs need him. They fell to 1-6 overall without the four-time league MVP, and with an upcoming trip out West, things could get a lot rougher for a team expected to contend for a title.

James, who hasn’t played since Dec. 28, will accompany the Cavs on their five-game trip.

During Wednesday’s game, the Cavs pulled off their second big trade in three days, acquiring 7-foot-1 center Timofey Mozgov from Denver in exchange for two first-round draft picks. The Cavs could have used Mozgov in the second half to battle Howard, who grabbed 12 boards and even jawed with some Cleveland fans in the final minutes.

Howard didn’t recall McHale’s pep talk, but something got him going.

“I just saw some opportunities to where instead of just watching the shot, I was fighting for the rebound,’’ Howard said. “I’ve got to start doing more of that when things aren’t going at the offensive end, just go get it off the glass.’’

Irving, who missed Monday’s loss in Philadelphia with a sore back, scored 23 in the first half, making 9 of 11 shots and moving with his usual catlike quickness on drives.

Harden, the NBA’s leading scorer at 27 points per game, was just 2 of 10 from the field in the opening half.