Torres back at Atletico in time to beat Real 2-0

Torres back at Atletico in time to beat Real 2-0 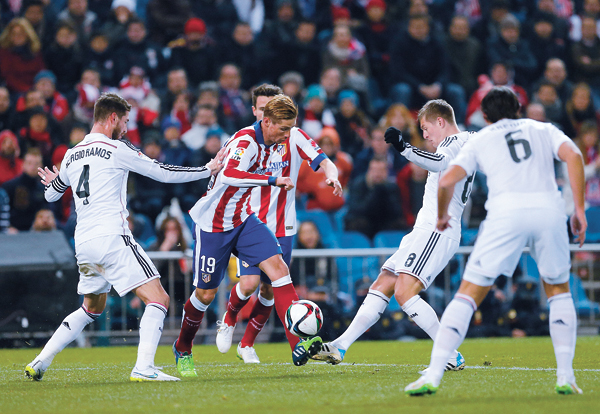 Atletico’s Fernando Torres tries to get through the defense during a Copa del Rey match against Real Madrid in Madrid on Wednesday. [AP/NEWSIS]

Fernando Torres made a winning return to Atletico Madrid on Wednesday as the Spanish league champions secured an impressive 2-0 victory over city rival Real Madrid in the Copa del Rey.

Midfielder Raul Garcia converted a 57th-minute penalty in the first leg match of the Copa’s last 16, before Jose Gimenez headed Atletico’s second goal in the 76th.

Torres, who supported Atletico as a boy and went on to make 244 appearances for the club, was applauded as he went off in the 59th minute at Vicente Calderon Stadium. Four minutes later, Madrid sent on Cristiano Ronaldo to try to spark a comeback.

Torres returned to Atletico on loan from AC Milan during the winter transfer window. Wednesday was his first win with Atletico over Madrid after nine previous attempts in his first stint in Spain, though he did beat Madrid twice with Liverpool.

“It feels good, as it always does when you beat a rival,” Torres said. “I’m happy for many things, for my return, for the team’s victory, and for the great atmosphere in the stands.”

The victory showed how times have changed in the Spanish capital since Torres last played here in 2007. Then, Atletico was mired in what would prove to be a 14-year winless drought against Madrid that ended in the final of the 2013 Copa del Rey.

Atletico has now beaten Madrid in the cup, the league and the Spanish Super Cup since it lost to Madrid in the Champions League final last season.

In the league, Diego Simeone’s team has also pulled to within one point of Madrid as it tries to defend its title. Atletico visits Barcelona on Sunday with both teams level on points behind the pacesetters.

“Madrid can’t lose, and we have lost two,” Madrid defender Marcelo said. “Now we have to analyze why we lost so it doesn’t happen again.”

Elsewhere in Wednesday’s cup action, Villarreal beat Real Sociedad for a second time in a month with a 1-0 victory. Denis Cheryshev scored the winner in the 72nd minute as Villarreal extended its unbeaten run to 12 games in all competitions.

Alvaro Negredo converted a penalty four minutes from time to give Valencia a 2-1 win at home over Espanyol after Christian Stuani had canceled out Jose Gaya’s opener for the hosts.