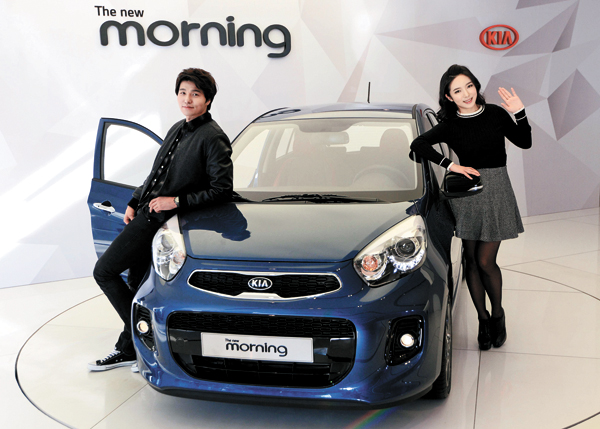 Kia Motors introduces the 2015 Morning at its showroom in Apgujeong-dong, southern Seoul, on Thursday. [NEWSIS]

The combined domestic market share of the nation’s leading automaker, Hyundai Motor, and its affiliate Kia Motors fell below 70 percent last year for the first time since the two auto giants became sister companies in December 1998.

According to data released on Thursday, the market share of the two companies in 2014 was 69.3 percent - 41.3 percent for Hyundai Motor and 28 percent for Kia Motors - down 2.1 percent from the previous year.

Industry insiders said the recent expansion of foreign brands led by BMW and Volkswagen and a series of new models introduced by domestic rivals had an impact on the two automakers. 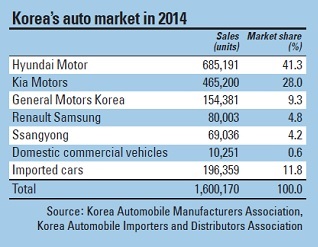 One of the reasons is because imported cars have been performing better in the past few years.

The most popular foreign brand last year was BMW, which sold 40,174 units in the country, followed by Mercedes-Benz with 35,213 and Volkswagen with 30,719 units. The best-selling import model was Volkswagen’s Tiguan 2.0 TDI BlueMotion SUV with 8,106 units sold, followed by the BMW 520d sedan with 6,546 units sold.

Another reason for the erosion of Hyundai-Kia market share is the increasing popularity of its Korean rivals.

Korea, the nation’s third-largest automaker, sold 154,381 units last year, the company’s best performance since it entered the Korean market 12 years ago. Renault Samsung’s 2014 sales also increased by 33.3 percent from the previous year, thanks to its QM3 compact utility vehicle.

“We don’t think we did a bad job,” Hwang Kwan-sik, spokesman of Hyundai Motor, told the Korea JoongAng Daily.

“Imported cars are no longer goods that only rich people can buy, meaning that they have been popularized gradually in a domestic market that is getting bigger every year. Looking at last year’s performance, we sold more than 8 million cars globally [which was about 140,000 more than the goal]. Since the companies will introduce new versions of the Tucson SUV, and Avante and K5 sedans, we expect to grow more this year.”

In reality, Hyundai Motor’s market share didn’t decline much as it dropped by only 0.3 percent from last year’s 41.6 percent. The market share for Kia, however, declined by 1.8 percent despite the introduction of a new Carnival van and Sorento SUV.

The company says it was unable to meet demand due to a partial strike by its labor union that began on May 29 and lasted 147 days.

Hyundai Motor is trying to establish a new wage system for employees as part of plans to stabilize management.

The company on Thursday said that a wage committee consisting of executives, union leaders and university professors departed on a trip to France and Germany on Tuesday to study wage systems of Audi, BMW, Volkswagen and other related institutions.

“In the past, labor union members visited places only to watch German rivals’ production lines, like they were on a tour,” said Kim Dong-ho, a business professor at Korea University and a member of the committee. “They are serious this time and want to learn about their wage systems because they know that improving and stabilizing the company’s wage system will eventually stabilize employment.”

Kim added that the company will try to install a new wage system after discussing the issue with the labor union.

With its effort to change the wage system, Hyundai Motor also plans to strengthen its small sedan lineup, the biggest market segment for the company globally.

It will start by introducing a diesel Accent sedan on Thursday. The company said the model provides fuel economy of 18.3 kilometers per liter (51.7 miles per gallon), the best among Korean passenger vehicles, thanks to an in-house built double clutch transmission.

Kia Motors also started selling the 2015 edition of its Morning on Thursday. The model has many safety features, including a tire pressure management system.

The company has hired a consulting firm to try new marketing strategies to boost sales, particularly among buyers in their 20s and 30s who favor imported cars such as the Volkswagen Golf and BMW 3 Series.

Outside the country, Hyundai and Kia are expected to expedite completion of new factories in China and Mexico to improve their global competitiveness and challenge Japanese rivals that have been aggressively trying to expand their market share on the back of the weak yen.