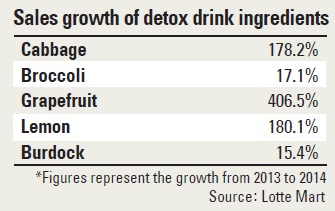 Last year, many health-conscious consumers joined in the detox juice trend, giving a sales boost to fruits and vegetables considered to be highly nutritious.
Detox juice is widely believed to be a powerful blood cleanser. People who detox commit to a juice fast for several days when they limit their diet to drinks made of fresh vegetables and fruit.
Many Koreans were introduced to juice detox diets in 2013 and they gained wide popularity last year.
Juice recipes vary based on preference, but many Koreans prefer to detox with fruit-based beverages.
Grapefruit sales last year increased a whopping 406.5 percent compared to 2013, according to Lotte Mart, which attributed the sales jump to the popularity of juicing.
“The fruits and vegetables showing significant sales growth are all ingredients that are often used in detox juices,” said Byun Ji-hyun, head of marketing at Lotte Mart. “Since cleansing juice products are quite expensive, it seems that people prefer to make their own.”
Grapefruits contain lycopene, which is a compound found in red fruits and vegetables that helps reduce the risk of cancer.
Also on the best-selling produce list were lemons and cabbage. Lemon sales jumped by 180.1 percent year-on-year while cabbage went up 178.2 percent.
Lemons are the most popular detox ingredient worldwide while cabbage is known for preventing stomach ulcers.
Broccoli also rose last year, by 17.1 percent over 2013, burdock sales were up by 15.4 percent over the same period.
“At the beginning [of the trend], people stuck with fruit such as grapefruits and lemons because they are more familiar sources of juice,” said a Lotte Mart representative. “But, as the year progressed, green vegetables also become popular as people wanted to blend fruit with veggies.”
For people who think juicing is too time consuming, food companies have launched their own pre-made detox drinks.
Daesang Wellife makes Freshtox, a juice blend of broccoli, tomatoes and bananas.
Maeil Dairy Industry and Woongjin Food both released pure juice products last year that were well received, but they cost two to three times more than regular juice.
ejpark@joongang.co.kr [BY PARK EUN-JEE]