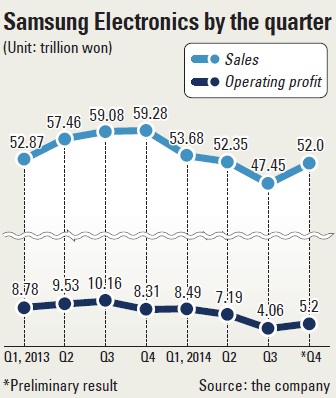 Samsung Electronics estimated Thursday that operating income for the fourth quarter of 2014 dropped 37 percent year-on-year, but the market responded positively because that was better than expected.

In an earnings preview, Samsung put its operating profit for the October-December period at 5.2 trillion won ($4.7 billion), higher than a market consensus of 4.9 trillion won.

That result signifies that the company’s profit for 2014 will be the lowest since 2011, as profits from the smartphone business remained weak.

Samsung has been struggling to maintain its crown as the global smartphone leader, and it has lost market share for three consecutive quarters up to the July-September period because of competition from Apple’s new iPhones and cheaper Chinese rivals such as Xiaomi.

The fourth-quarter profit estimate marked something of a rebound from the third quarter’s 4.1 trillion won profit, which was the company’s lowest in more than three years.

“We could say that Samsung’s earnings hit a low in the third quarter,” said Kim Young-chan, an analyst at Shinhan Investment.

Nevertheless, as profits from semiconductors expanded and the Korean won weakened in the fourth quarter, averaging 1,085 won to the U.S. dollar from 1,025 won in the third, the company’s profit rose quarter-on-quarter.

Its 5.2 trillion won quarterly operating profit is around 1 trillion won higher than that of the third quarter, according to preliminary earnings released by Samsung.

“In addition, the won-dollar exchange rate, which rose around 6 percent compared to last quarter, was a positive factor for strong exports of semiconductors.”

Samsung probably shipped 75 million smartphones worldwide in the last three months of 2014, after selling 78.7 million in the third quarter, according to HMC Investment Securities.

Some say that Samsung will now revert to being a semiconductor company from a smartphone maker. It has relied on its memory chip unit for earnings growth for 40 years.

Samsung’s Vice Chairman Jay Y. Lee, who is heir apparent to his ailing father, Samsung Chairman Lee Kun-hee, has been leading a revamp strategy by cutting the number of smartphone models while spending $15 billion on a new chip plant in Korea.

The company’s quarterly sales declined 12 percent from a year earlier to 52 trillion won, in line with analysts’ expectations.

The company has not yet provided details of net income or division earnings with the audited full financial results due to be released later this month.

Market analysts say that the tech giant will recover only if it grows in the first quarter, which is usually the off-season for the electronics business.

A big issue is how Samsung will be able to beat Xiaomi in the mid- to low-priced smartphone market and gain ground in Southeast Asia with a strengthened lineup of affordable products such as the Galaxy Grand Max.

Opinions were divided as to whether the Korean behemoth will continue to post earnings growth through this year.

“Samsung has been renewing its lineup of smartphones since the fourth quarter to boost competitiveness in the global smartphone market,” said Lee Jung, a local analyst at Eugene Investment & Securities.

“Since the first quarter of this year, the market expects that concerns about the performance of its IM division will be resolved significantly with various new products.”

Samsung also announced Thursday that it is launching a new low-end smartphone, the Galaxy Grand Max, sometime this week. It will cost around 319,000 won and have enhanced camera features.

With a five-megapixel front camera, which is an upgrade from the Galaxy S5’s 2.1 megapixels, Samsung said the device will make taking selfies easier, with a Wide-Self Shot feature allowing users to take 120-degree photos.

On Korea’s main bourse, the Kospi, Samsung Electronics started off up 1 percent at 9:45 a.m. from the previous trading day as concerns about dividends turned to expectations.

At the close, Samsung’s shares were quoted at 1.314 million won, up 0.54 percent from Wednesday’s close.

Samsung’s stock slumped 3.3 percent last year, following a 9.9 percent decline in 2013. It is the largest company on the Kospi in terms of market capitalization.