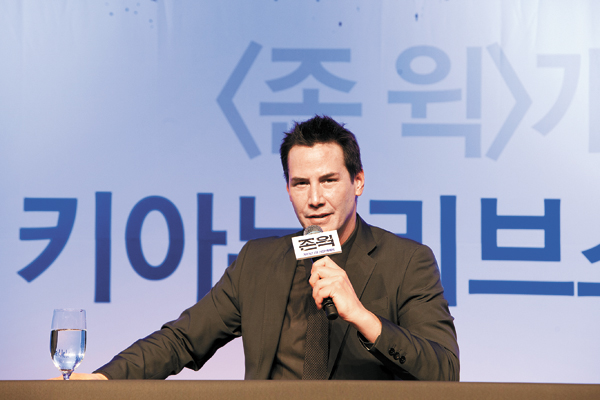 Canadian actor Keanu Reeves talks about his latest action movie “John Wick” during a press conference Thursday at the JW Marriott Hotel in southern Seoul. Provided by the distributor

Hollywood actor Keanu Reeves said “grief” was the common factor between his personal life and the lead role he plays in the upcoming movie “John Wick.”

“[I sympathized with] the idea of losing a loved one and what to do to fight for that grief when something is taken away from him in a John Wick way,” Reeves said during a press event held Thursday morning at the JW Marriott Hotel in southern Seoul.

“The Matrix” star appeared at the conference hall 30 minutes later than scheduled, with a clean shave and dressed in a sleek suit.

He repeatedly apologized to reporters for his lateness. 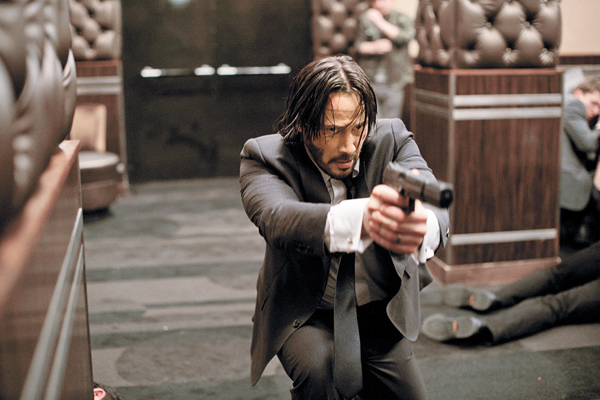 Keanu Reeves plays a ruthless killer who takes on a revenge act in the upcoming movie “John Wick,” which opens in local theaters on Jan. 21. Provided by the distributor

This is Reeves’s second time in Korea after his visit to promote the film “Street Kings” in 2008.

“John Wick” is an action-heavy flick in which Reeves plays a retired assassin who tries to live in peace with his dog, a final gift from his dear wife who dies from an illness.

But when the son of a Russian mob boss accidently kills the dog and steals his car, John returns to being a legendary killer and risks everything to get revenge.

The 51-year-old action star’s stunt scenes shine all the more against the film’s simple storyline.

I can't do as much as I used to such as jumping high, but with all the experience, it has made me more efficient in terms of learning choreography and the moves,” said Reeves.

The actor transforms into a ruthless killing machine, pulling off gun battles, bare-knuckle fights and even Brazilian jiu-jitsu, just like his moves in “The Matrix” trilogy.

“I trained for about three months. I enjoyed it so much and maybe it’s what helps keep things together [in the film],” he said.

Aside from the actor’s love of performing action scenes, the script for “John Wick” caught his eye because of its emotional touches.

“John Wick is a hero to himself. It’s not only revenge, but he is fighting for his inner life, grief and love for his wife,” said the actor.

“I liked his suffering during the film and also his passion and will,” he added.

Reeves also mentioned that Korean cinema served as an inspiration for the movie’s directors - David Leitch and Chad Stahelski - especially in terms of implementing long takes in the action scenes.

When asked about the hardest action movie he has pulled off so far, Reeves said it was the “Matrix.”

“It was because it was my first time doing kung fu. I think I couldn’t have done ‘John Wick’ if I hadn’t done ‘The Matrix’ trilogy,” he said.

The actor also expressed his stance on the recent hype surrounding superhero movies in theaters worldwide.

“I think it is not only because it’s cool to watch the extraordinary, explosions, circumstances and actions, but it’s something about fantasy and wish-fulfilling,” said Reeves.

“The powerless having a chance to become effective and bring change in the world and protect someone is attractive to culture and people around the world,” he said.

Reeves, who arrived in Korea on Wednesday, was scheduled to hold a red carpet event at the Coex Megabox in southern Seoul on Thursday evening.