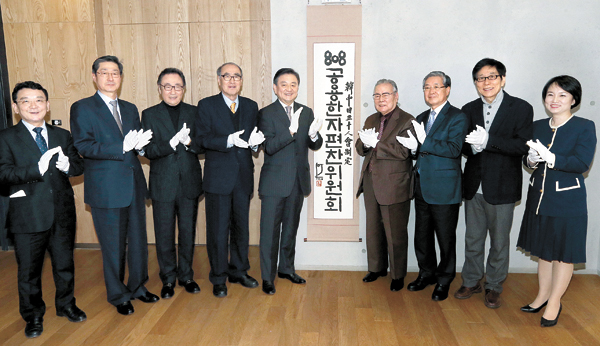 A committee led by the JoongAng Ilbo held a ceremony Wednesday to celebrate a soon-to-be-published standardized list of the 808 most widely used Chinese characters in South Korea, mainland China and Japan.

The event was held at the JoongAng Ilbo headquarters in Jung District, central Seoul. One of the ceremony’s highlights included a calligraphy scroll donated by renowned artist Park Wan-kyu. The standardized list of 808 characters is set to be published in book form this April.

Thirty experts from the three nations part of the Northeast Asia Trilateral Forum succeeded in April last year in compiling a list of 808 characters most commonly used in each country. For a decade since its establishment, the group has strived to enhance cultural exchanges that can help to increase peace and prosperity in the region at a time when political tensions have escalated.

Discussions led by the Northeast Asia Trilateral Forum also touch on environmental and financial issues, among others.

The trilateral forum is co-hosted by one leading media group in each country: JoongAng Ilbo; Xinhua News Agency in China; and Nikkei, a Japanese newspaper. Key members of the organization include Hong Ky-tack, the chairman of KDB Financial Group; Park Sam-koo, the chairman of Kumho Asiana Group; Kim Myung-ja, the former environment minister; Dai Xianglong, the former governor of the People’s Bank of China; and Kengo Kuma, a University of Tokyo professor.