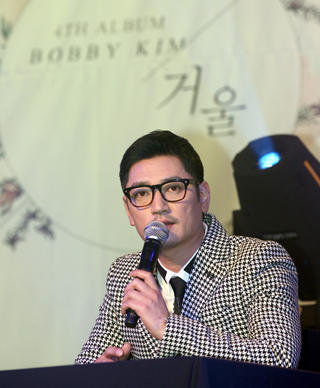 R&B singer Bobby Kim is being investigated by the FBI on the suspicion of causing a disturbance on an airplane.

According to Korean Air on Friday, the 42-year-old singer was on a flight to San Francisco to visit his sister in the United States.

He boarded the flight Wednesday afternoon.

But Kim became intoxicated five hours after boarding the airplane, the airline said, and spent about an hour shouting at flight attendants and making sexually suggestive comments.

The singer reportedly touched the arm and grabbed the waist of a flight attendant. He also asked the flight attendant questions such as “Where is your hotel?” and “What’s your phone number?”

Korean Air said other members of the cabin crew tried to calm the singer down by putting him in one of the crew’s seats, away from the other passengers.

“[Bobby Kim] upgraded his seat from economy to business using his mileage but he was seated in an economy seat,” the singer’s agency, Oscar ENT, told Yonhap News on Friday.

“He didn’t feel good and began to drink wine. He doesn’t even remember what he has done wrong.”

Kim allegedly had about six glasses of wine.

Since Kim has U.S. citizenship, he is likely to be punished in the United States if he is proven guilty.

Kim debuted in the music scene in 1994 and has released numerous hits such as “Love… That Guy” and “A Whale’s Dream.”

He released a new album for the first time in four years last October.