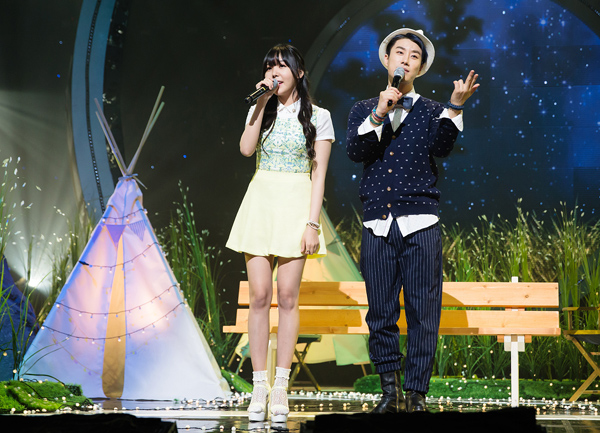 rior to the 2015 Golden Disc Awards, which will be held in Beijing this month, Ilgan Sports, an affiliate of the Korea JoongAng Daily, will introduce the K-pop acts that have been nominated for grand prizes.

Summer is the busiest season for singers who want to captivate listeners with upbeat dance music.

And last summer was no exception.

Several singers released dance songs and competed against one another.

One of the tracks released in June was “A Midsummer Night’s Sweetness” by rapper San E, pictured right, and Raina, a member of girl group After School.

The song describes the emotions of a man and woman who fall in love with each other. With a catchy melody and down-to-earth lyrics, the song stayed on the major music charts for a long time, even after summer.

As a testament to its popularity, the collaboration stayed on Genie.com’s real-time music chart for 77 hours in the second week of June.

Most songs exit the chart within less than a day.

The group’s sultry choreography for the song also played a part in making it even more popular.

With the easy-to-follow melody and the sexy dance moves, the song topped all the nation’s 10 music charts upon its release.

The urban euro-pop tune ranked first on the iTunes singles chart in some Asian countries including Taiwan and Singapore.