Chill out at winter’s coolest festivals

Chill out at winter’s coolest festivals 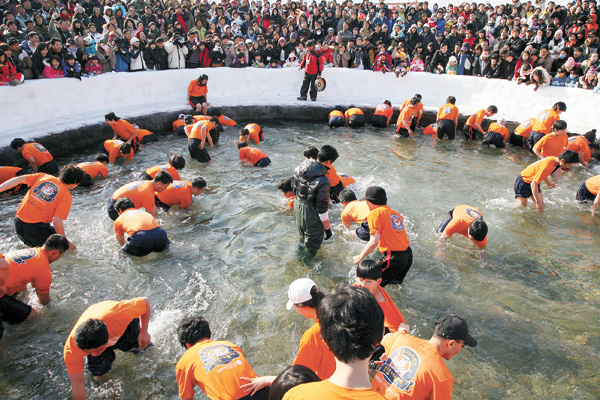 Visitors to Hwancheon Sancheoneo Ice Festival are trying catching trout with their bare hands. The event this year opens today and will last until Feb. 1. Provided by the festival.

The Boryeong Mud Festival is without a doubt the most well-known festival in Korea among expats and overseas visitors. But organizers of winter festivals in Gangwon - the coldest region in Korea - are hoping to steal this title in the near future.

A series of particularly popular festivals for having fun in subzero temperatures are focused on fishing in pre-cut holes on frozen lakes or reservoirs.

After the winter festival concept was first introduced and gathered steam, many cities began developing similar events to lure people out of their homes and onto the ice.

This festival in Hwacheon, Gangwon, is currently the most popular of its kind.

The organizing team of the event said that 5,000 tickets had been reserved for expats and travelers from overseas by the end of December. 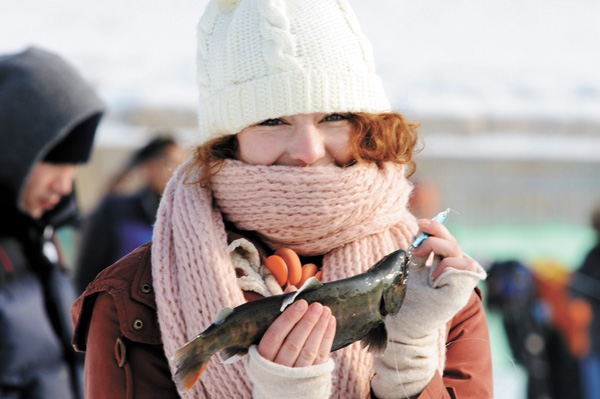 A visitor poses with a cherry salmon at Hwacheon Sancheoneo Ice Festival.Provided by each festival

It speculates that another 1,500 reservations will be made ahead of the festival opening.

Altogether, this is more than double the 3,000 tickets sold prior to the opening of last year’s event.

The boost came from the organizer’s efforts to assist visitors in many different languages.

A call center is available for people looking for information in English, and translators who can speak English, Chinese and Japanese will be on hand at the event itself. The information booklet given at the site comes in Chinese and Korean.

There is also a separate ice rink exclusively for foreigners to fish.

“In case you don’t find enough information about what’s going on at the festival when browsing the Internet, you can get better assistance when you are actually at the festival,” the organizing company Nara said.

Of course, before the foreign community showed interest, the event was already sturdily drawing in more visitors year after year. After the festival was established in 2003 and gathered 220,000 visitors, the number jumped more than six-fold in a decade to record 1.33 million last year.

With the growing popularity, the festival earned the top spot on the Ministry of Culture, Sports and Tourism’s “Major Festivals in Korea” list last year and this year.

The Boryeong Mud Festival earned the top title for five consecutive years until 2013 before the ministry decided to stop honoring the same event in order to allow other rising festivals to shine.

“This is the only winter festival that made our list of ‘Festivals to Visit for 2015,’” said an official at the Ministry of Culture.

“Considering the cold temperature, winter events usually have a hard time gaining wide popularity, but the Hwacheon Sancheoneo Festival has been on the list and has gotten to the top level.”

If it makes it into the category over a number of years, the government will categorize it as a “Global Festival.”

The event’s main focus - as you can see from the title - is catching sancheoneo, often known as cherry or masou salmon, which only live in clean waters.

Until Feb. 1, when the festival ends, you try catching a fish with your bare hands inside a large wading pool filled with fish along with dozens of other people in the water. After hours of struggling, visitors can cook the fish they catch on the spot.

To add more fun to the festival experience, the organizer also has a sledding and ice skating zone.

Pyeongchang in Gangwon, the host city of the 2018 Winter Olympics, is also holding a similar event. 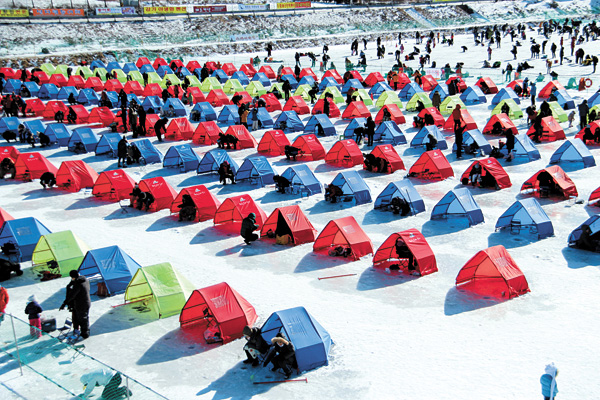 Tents for fishing are available to rent for 20,000 won (18 dollars) at the Pyeongchang Trout Festival;

The Pyeongchang Trout Festival, which has already been catering to visitors for the past seven years, will be open until Feb. 8.

The festival recorded around 580,000 visitors last year and is one of the largest in Pyeongchang.

“Pyeongchang is where Korea first started to raise trout,” said Choi Gyo-sun, the chairperson of the festival’s committee.

“Trout from this region is famous for its chewy texture and rich taste.”

It costs 13,000 won for an adult to participate in the ice fishing.

You can also buy a fishing rod for 3,000 won. Your catch can be eaten raw on the spot or cooked for an additional 3,000 won.

During the festival, around one ton of fish - one weighs around 800 grams - are provided every weekday, and over two tons every weekend.

For visitors who struggle to catch a fish from a hole, which has a diameter of about 10 centimeters, the organizer gives out tips. For example, it’s easier to reel one in when the weather is warm and the sky is clear. Usually, fish try to catch bait between 10 a.m. and 11 a.m. and 3 a.m. and 4 p.m.

Snow sculptures decorate the festival site and winter activities such as sledding and ice skating are provided for 6,000 won.

If you’re in the area, Pyeongchang is a great location to access the East Sea or go skiing at Phoenix Park or Yongpyong Ski Resort, some of the most famous ski resorts in the area.

If a trip to Gangwon is too time consuming, there is a similar event in Gyeonggi. The Cheongpyeong Ice Flower and Trout Festival is open now until Feb. 1. If the weather stays cold enough, the event will be kept open to visitors until Feb. 22. 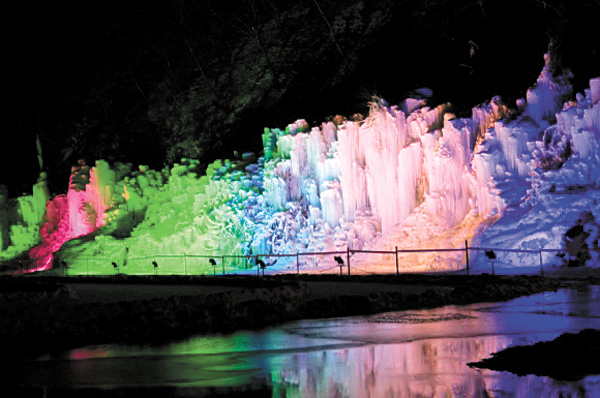 A man-made ice wall at night during the Cheongpyeong Ice Flower and Trout Festival. Provided by each festival

The event, compared to other fishing festivals, is relatively new. It celebrates its fifth year this year. The fishing fee for adults is 12,000 won. You will see some people who lie down on the ice and try to catch a glimpse of a school of trout in order to find the right place to put their fishing rods.

If you don’t catch anything after hours of trying, no need to worry - you can buy a fish for 25,000 won, which is actually bigger than the ones swimming in the waters under the thick ice.

If trying to catch a fish isn’t something your young children enjoy, they can spend some time riding a small car on the ice for 5,000 won.

Here you can see lots of frozen waterfalls that the organizer of the festival has created. Icicles around the site also add to the atmosphere of the entire experience.