Housing market is teetering on the verge of recovery

Housing market is teetering on the verge of recovery 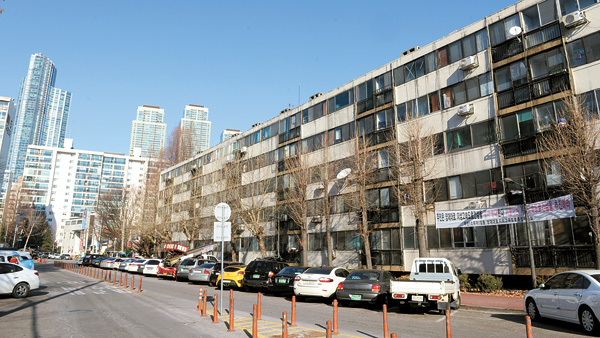 The Jugong 1 complex in Gangnam District, southern Seoul, is expected to be one of the largest beneficiaries of the government’s eased regulations on reconstruction.

The Korean housing market at the beginning of 2015 seems similar to the start of last year.

The market surged during the final three months of 2013 and 2014 due to the government’s massive deregulatory policies to boost transactions. But in 2013, the festive atmosphere was short-lived, as the bills got bogged down in the National Assembly and were never passed. 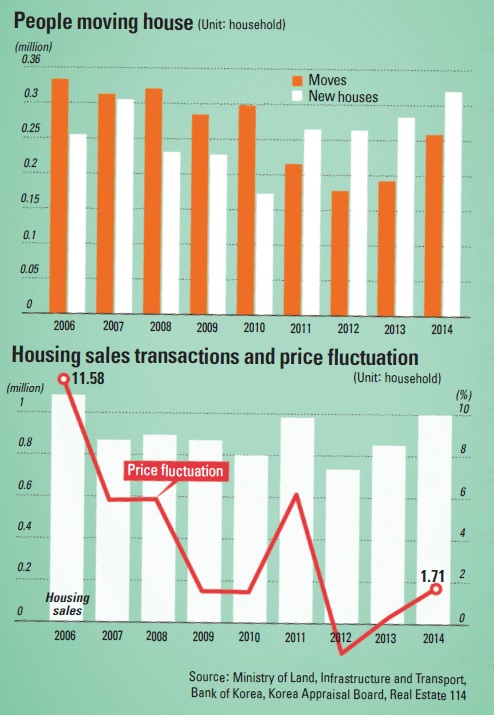 However, last year’s bills were pushed through the Assembly at the end of the year, bringing a sigh of relief in the market.

At the start of 2015, the local housing market welcomed the new year with hopes of a fast recovery because of improvements in the market the year before. 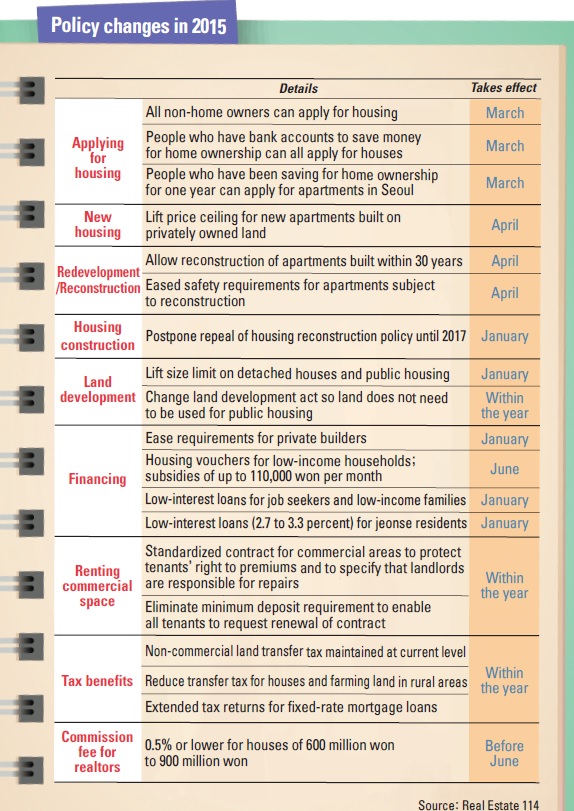 According to data compiled by the Ministry of Land, Infrastructure and Transport and the housing market analysis group Real Estate 114, nearly one million houses were sold nationwide last year. This was the highest level since the global financial crisis in 2008, and 150,000 more than the annual average made from 2009 to 2013. The transaction level last year was similar to 2006, when 1.08 million homes traded hands.

Housing prices also improved over 2013 to come close to the growth rate in 2012.

The growth rates were not the best, market experts said, but some energy has been injected back into the sluggish housing market.

Many positive factors could boost the market this year. The National Assembly’s passing of three major real estate deregulations has created more trust in the market.

However, there is a shortage in the housing supply, particularly in Seoul.

Real Estate 114 estimated that about 244,900 houses nationwide will be available this year, about 5 percent less than last year and similar to the annual average between 2009 and 2014.

The number of transactions per year was about 320,000 houses before the financial crisis.

About 19,830 houses are expected to be available this year in Seoul, slightly more than half of the 36,860 units up for sale last year. Before the financial crisis of 2008, average housing transactions were at more than 50,000 houses.

Another 50,000 houses in Seoul are set to be demolished for reconstruction next year, which drags down the number of units for sale.

Many of the buildings that will be reconstructed are in Gaepo in Gangnam District, Banpo-dong in Seocho, and Godeok in Gangdong District.

High demand for jeonse will continue this year, as the supply of available houses shrinks.

About 830,000 homes are estimated to see their two-year jeonse rentals end this year.

When adding in landlords, who are planning to switch from jeonse contracts to monthly rent because of low savings interest rates, the numbers of jeonse houses will drop.

This may be bad news for people on the lookout for jeonse apartments, but it could also lead to more purchases of homes, since the gap between the sales price of an apartment and its jeonse price at the end of last year was 30 percent.

“The year 2015 will be full of factors that have positive effects on housing transactions and rising overall sales prices,” said Heo Yoon-kyung, a research fellow at the Construction Economy Research Institute of Korea.

The price of units in reconstructed apartment buildings will also go up.

Old apartment complexes set to be rebuilt - particularly those in Gangnam, Seocho and Songpa districts - have played a part in pushing up overall home prices because high investment demands have caused frequent price fluctuations.

The government and the National Assembly agreed to postpone implementation of a policy that prevents landowners from making excess profits on reconstructed houses in 2017.

The presale price ceiling of private-owned housing land, which used to be fixed at the government’s appraised amount, was relaxed to be flexible. Land donation requirements for private builders were also lowered. In the past, private builders had to lend a part of their newly built facilities to the local government for public use.

With the recent changes, builders will earn more by saving on reconstruction cost, not having to donate property, and selling houses at a higher price. Also, the housing presale limit was eased to allow people to apply for multiple housing units at once.

This will bring in major investors, in particular to the three districts in southern Seoul.

Market analysts say that the builders will start new projects as soon as possible to take advantage of the deregulatory policies.

Builders must plan the project and apply for a reconstruction license by 2017. Gangnam-based apartment complexes with 40,000 units have not yet been applied for reconstruction.

“How much the Gangnam area’s housing market heats up through the year - and whether or not that will boost the entire national housing market - will be two key factors this year,” said Park Won-gap, head researcher for real estate at KB Kookmin Bank.

However, the unsteady local economy is a crucial factor that could doom the market because the loan interest rate is the decisive factor when it comes to home purchases.

The domestic economy hasn’t improved to the level the government had expected, and economic uncertainties outside the country are growing rapidly.

When making a final purchase decision, people need reassurance that the housing price will increase in the future, because they must take out a loan of at least 100 million won to buy an average-priced house of about 340 million won in the greater Seoul area.

When borrowing 100 million won from the bank, people must pay about 900,000 won back per month for principle and interest.

This is about 20 percent of the average worker’s monthly income in Seoul. The average annual growth rate of housing prices, between 1 percent and 2 percent, is way too low to turn jeonse or monthly renters into home buyers.

Many economists say the interest rate will drop further this year. But if not, household debt will increase.

But a low housing supply doesn’t necessarily mean that the demand for purchasing a house will increase. After the 2008 financial crisis, the average price of a Seoul home stayed low even as the numbers of available houses fell.

“I would say this year’s real estate market is in the middle of uncertainty, but there is hope,” said Kwon Dae-jung, a real estate professor at Myongji University. “Positive signs started appearing in the market thanks to deregulations, but other unexpected factors in political, economic and social spheres in and outside the country may bring down these hopes.”