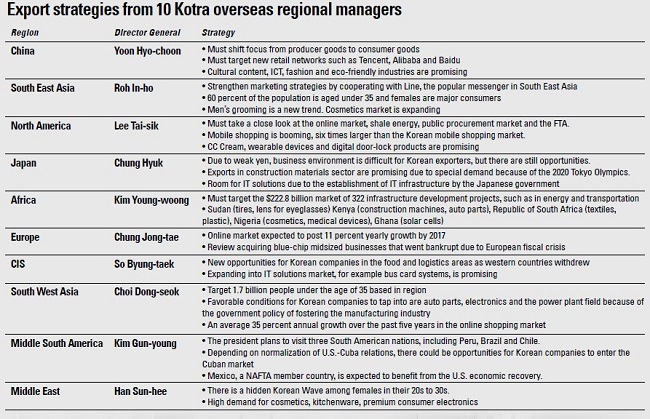 Korean beauty product retailer Memebox is a rising star among small and midsize companies. In 2012, its first year of business, it posted 1.3 billion won (around $1.2 million) in revenue.

The company promotes cosmetics created by Korean SMEs on YouTube and retails them through its mobile application and website.

Thanks to Memebox’s robust growth in the online and mobile market, it has reaped 25 percent of its revenue, or 4.2 billion won, from countries such as the United States and China. 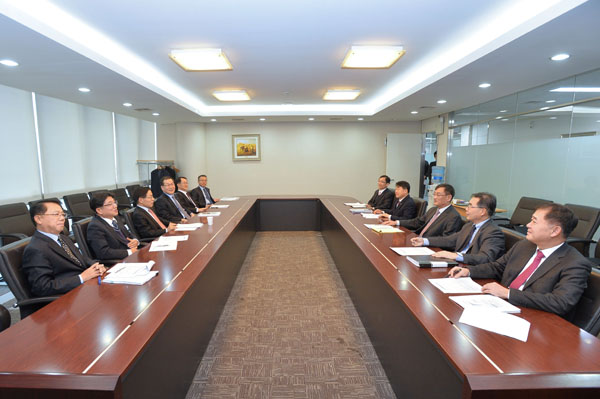 “Finding a new retail method was the key to success, instead of exporting through the existing trade companies with the old styles preserved since the 1980s and 1990s,” said Kim Do-in, co-founder and CPO of Memebox.

Using Memebox’s success as an example, the general managers of the Korea Trade Promotion Corporation (Kotra) discussed the topic of how companies can use the retail revolution triggered by the increasing use of mobile technology to their advantage.

The organization’s 10 regional managers working overseas gathered in Kotra’s conference room last Tuesday to share tips on breaking into the different markets they are based in.

In particular, regional managers in China and the United States, the two largest markets Korea exports to, pointed out that Korean companies might lack competitiveness in the future if they do not catch up in online and mobile retail channels.

“Although [China’s] economic growth has fallen to 7 percent, Korean companies can target new retail channels such as Tencent, Baidu and Alibaba.”

As for which type of businesses should export to the Chinese market, Yoon suggested companies involved in cultural content, information and communications technology (ICT), textiles, fashion and eco-friendly products.

For the United States, which has been showing signs of economic recovery, posting quarterly economic growth of 5 percent, the issue was also to target online retail networks in the country.

Lee Tai-sik, Kotra’s regional manager for North America, said there is growing demand in the United States for Korean beauty products such as CC cream.

“In terms of beauty items, many consumers make purchases through online shopping channels such as Amazon.com,” Lee said.

The Internet retail market in the United States is worth $264.3 billion, up 16.5 percent from a year earlier. Wearable devices and digital door-locks have been cited as promising items for Korean companies to export, according to Lee.

Kotra’s regional manager for Asean countries suggested that companies should use social media for marketing purposes.

Roh In-ho, Kotra’s director general for Asean, said that the dominance of Naver’s Line as the No. 1 mobile messenger in Thailand shows how Korean companies could also thrive in the country.

However, the regional managers pointed out that Korean SMEs’ expansion into the online market is too weak.

“Korean companies tend to stick to the old methods even though the exporting environment has changed a lot,” said Lee. “If they succeed on Amazon.com or eBay, they can expand into offline retail networks.”

So Byung-taek, who oversees Russia and the Commonwealth of Independent States, said Korean companies will only find opportunities outside of the United States and Europe if they research the core philosophies of the nations they target.

He also said that there are now more opportunities for Korean companies as Western nations have withdrawn their businesses from Russia in the food, logistics and refinery areas.

And there are still opportunities for Korean SMEs in Japan despite the weak yen and the relatively stronger won, explained Chung Hyuk, the country’s regional manager.

“As the Japanese government is expanding its investment in IT infrastructure and due to related demands for the 2020 Tokyo Summer Olympics, there will be plenty of exporting opportunities for construction equipment companies,” he said.

Some of the regional managers said that exporters must take the geological and international economic risks of different regions into account.

“As the economy slows down due to the tumbling oil prices in the midst of geopolitical risks, large projects will be reduced in the region,” said Han Sun-hee, regional manager for the Middle East.

Kotra has also been opening seminars outside Seoul for SMEs to introduce strategies for entering overseas markets this week.