Lotte World Mall gets a committee on safety

Lotte World Mall gets a committee on safety 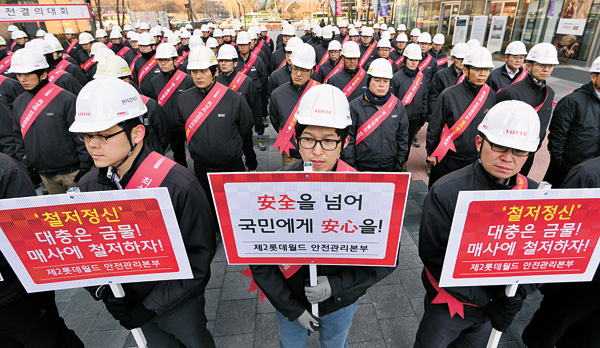 Lotte Group employees vow to get serious about safety at Lotte World Mall in Jamsil, southern Seoul, on Friday.

In response to controversy over the safety of Lotte World Mall in Jamsil, southern Seoul, Lotte Group launched a safety committee on Friday dedicated to managing the huge cultural and shopping complex.

The committee held an inaugural ceremony at Lotte World Mall attended by its top figures, followed by the members’ first meeting.

Lotte World Mall, part of a 3.5 trillion won ($3.2 billion) construction project, was touted as the center of Lotte’s future business strategy, but the building has endured a slew of safety mishaps - including cracks on the walls - since its opening in October.

The Seoul Metropolitan Government recently ordered Lotte World Mall to shut down its aquarium and multiplex movie theaters after a construction worker died from falling in the complex’s concert hall. Lotte is suspected of calling a hospital instead of emergency services to cover up the accident.

The safety committee will be divided into three parts - monitoring, safety inspections and communications teams - in line with the requirements drawn up by the city government.

The inspection sector will consist of outside experts on natural disasters, fire prevention, construction and electricity.

Lotte also pledged to release the results of its inspections through the committee’s communications team.

The conglomerate stressed that it will work closely with outside safety specialists to improve the overall management of the building.

“We will actively embrace opinions and ideas of outside experts in order to maintain independence,” said Lee In-won, the committee chief, in a statement.

“The committee will allow us to respond to any safety issue in a prompt and transparent way, which in turn will help Lotte World Mall to become a safer place that people can visit with trust,” Lee said.

Lotte Group added that the committee will consult on any safety-related issues coming from its subsidiaries, although its focus is on Lotte World Mall.

The Seoul Metropolitan Government granted provisional service approval in October on the condition that it could be withdrawn if Lotte failed to keep the building safe.

The complex, however, has had a string of safety lapses.

Cracks were found in several places - including a parking lot, aquarium and a restaurant - between October and December.

At the end of October, a 46-year-old employee of a Lotte subcontractor was cut when a piece of metal fell on him from the third floor. A more serious case unfolded in December when a worker died after falling from the mall’s concert hall during construction.

The case led the city government to shut down the concert hall.

Earlier this month, the Seoul city government said that it will cancel its operations approval if one more safety lapse takes place.