When it comes to price, not all stations are alike

When it comes to price, not all stations are alike 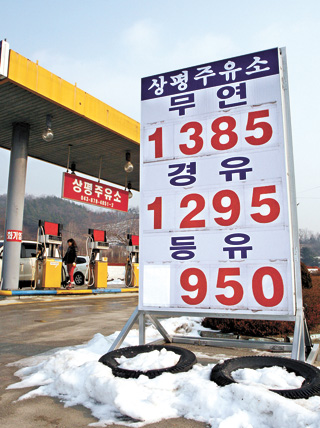 In a time of falling crude oil prices, there is a gas station in Eumseong County, North Chungcheong, that has earned a proud national reputation. As of Friday, Sangpyeong Gas Station, which is about 100 kilometers (about 60 miles) south of Seoul, was selling a liter of gasoline for 1,385 won, about $1.25.

For the last three weeks, this gas station has been the cheapest place in Korea to fill up your car. 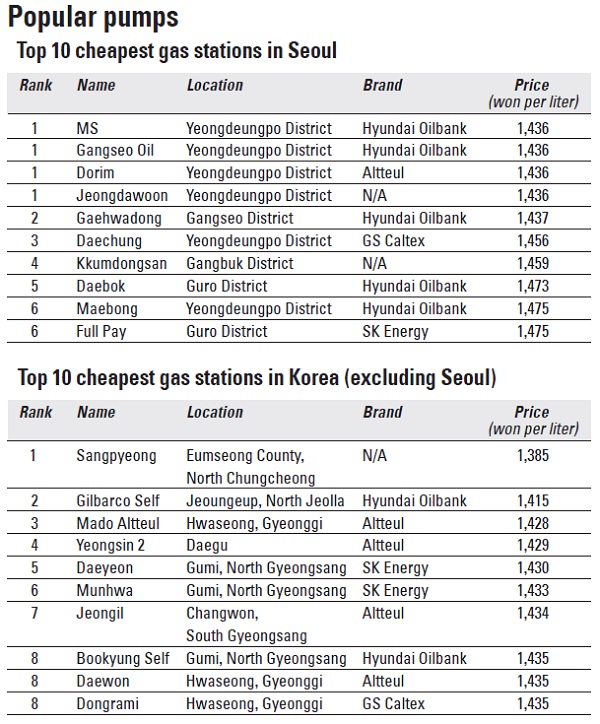 “Our gasoline is about 200 won cheaper than all others,” said Kim Deok-geun, who runs Sangpyeong Gas Station. “We can’t make money with this price, but by lowering the diesel price, we do make some profit.” 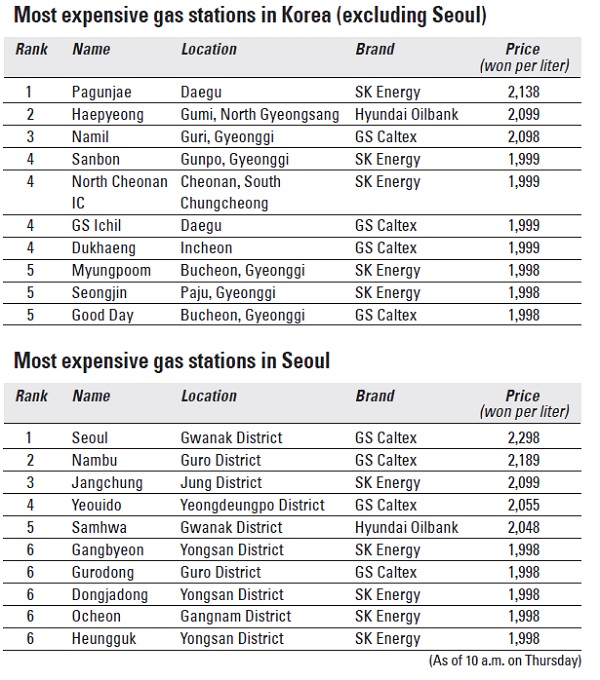 Kim said that his number of daily customers has jumped about 10 percent since the news spread that his gas was the cheapest in Korea. These days, about 100 cars fill up every day. Kim said he’s planning to lower the price more as crude prices keep falling. 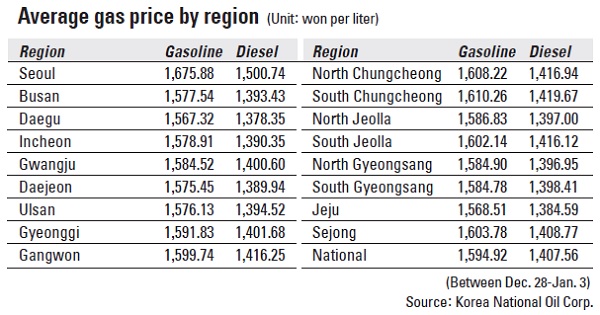 Gas stations say they are lowering their prices in a competitive spirit, but drivers say they’re not feeling much relief, especially those who live in Seoul.

So where are the cheapest gas stations?

After analyzing some 12,000 gas stations in Korea based on information posted on Opinet (www.opinet.co.kr), a website run by the Korea National Oil Corporation (KNOC), the nation’s 30 cheapest gas stations were easily found in Gumi, North Gyeongsang; Hwaseong, Gyeonggi; and Ganseok-dong, Incheon.

They sold a liter of gasoline in the 1,400 won price range. Korea’s average gasoline price on Friday was 1,553.5 won per liter, according to Opinet.

“These gas stations are thought to be in places where rents are cheap or the competition between gas stations is fierce,” said Han Seung-wan, who works on the gas price service team at KNOC.

Among some 580 gas stations in Seoul, those in Daerim-dong and Dorim-dong in Yeongdeungpo District were cheap, as well as in Eunpyeong District. But as competition over prices is heating up, the title of the cheapest gas station in the nation’s capital is changing day by day.

On Wednesday, Gaehwadong Gas Station in Gangseo District, western Seoul, sold the cheapest gasoline in Seoul with a price of 1,437 won per liter, but on Friday, it was No. 6 on the list with 1,415 won.

“It’s been six months since we’ve been doing business here,” said Kim Joon, who runs the Gaehwadong Gas Station. “Since our opening, we went for a cheap price strategy. And as international crude oil prices go down, we have been lowering the retail price steadily.”

He said that about 1,000 cars visit the gas station and some come from as far as Gangdong District in Seoul’s east side.

Data from Opinet shows that even in the same district the price of gasoline can differ by 700 won per liter. Why are gasoline prices different place by place?

Industry insiders said that although refiners’ supply prices are the same for all, retail prices vary because each gas station has different rents, labor costs and desired profit margins.

Although the supply price can vary a bit.

“If a gas station’s trading volume is large and it makes cash payments on time, we do supply gas at a discounted price,” said a spokesman from GS Caltex, the nation’s second-largest refiner.

Data from Opinet shows that gas stations setting high prices for gas are evenly spread across the country. They charge around 1,800 won to 2,000 won per liter.

According to industry insiders, Seoul gas stations in districts like Gangnam, Songpa, Seocho, Yongsan and Yangcheon, as well as the Yeouido area in Yeongdeungpo District, have traditionally had expensive gas prices.

In Yeouido in particular, where the National Assembly is located, politicians and rich businessmen are regular customers. There aren’t many gas stations, either.

“Consumer prices in Yeouido are generally expensive,” a gas station owner in Yeouido said on condition of anonymity. “Because we spend more on rent and labor costs, this has to be reflected in the gas price.”

Gas stations surrounded by company headquarters or office buildings are lucky, industry insiders said, because their customers aren’t very price sensitive because most pay with the corporate credit cards.

In order to find gas stations selling cheap gasoline in your neighborhood, the easiest way is to visit the Opinet website and search the “smart station” categories. Web portals like Naver and Daum also provide searches that compare the gas prices of gas stations.