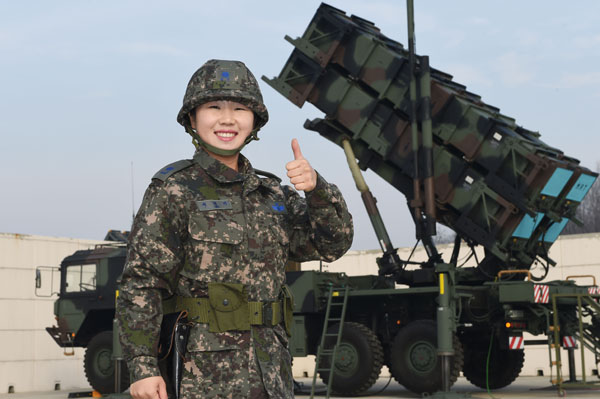 A female battery commander has been appointed for the first time in Korean air defense history. Maj. Lee Yeong-mi, selected on Jan. 6, will lead the Patriot artillery unit.

Although the Air Defense Artillery School has had a female battery commander in the past, her appointment is unprecedented because as a commander, Major Lee will be in charge of military operations.

Lee grew up in a military family and long dreamed of becoming an officer. As a child, she often listened to the war stories of her grandfather, who fought for the South during the 1950-53 Korean War.

“I wanted to devote myself to my country, following in the footsteps of my grandfather, and protect it,” Lee said.

She ultimately chose to join the Air Force under her family’s influence. Her father, Lee Seong-kyo, was an Air Force aviation maintenance sergeant when he was discharged from the Army, and her younger brother, Lee Jong-jin, is an Air Force master sergeant.

Her uncle - although he was not a professional soldier - also chose the Air Force for his mandatory military service.

In Korea, males between the ages of 18 and 35 are required to complete their compulsory military service for 21 to 23 months.

After graduating from Kyungpook National University with a degree in food science and nutrition, Lee applied for the Korea Armed Forces Nursing Academy and the Korea Army Officer Candidate School twice consecutively.

In 2002, she was admitted to the Air Force Office Training School, and since then she has accumulated experience in the Air Force as a combat solider and a commissioned officer.

Lee said she chose that area because she feels pride in commanding her troops on the scene.

“I have always wanted to serve in the air defense artillery unit because I understood that I would be given the opportunity to actually lead my comrades,” she said.

Lee will lead 100 subordinates in the Patriot unit in Cheongju, North Chungcheong, which plays a role in protecting the country’s airspace from enemy fire and ballistic missiles. 