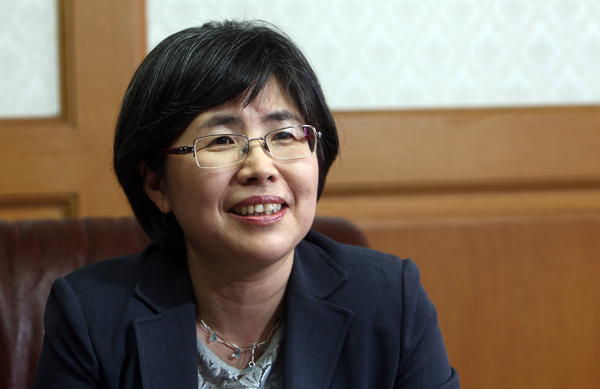 The National Assembly took one step closer Thursday to passing the long-awaited antigraft legislation known as the “Kim Young-ran bill,” which aims to tighten loopholes in existing corruption-prevention laws and toughen punishments for dirty public officials.

The bill is named after the former head of an anticorruption commission who proposed the legislation in 2011. It has been stuck in political wrangling for more than a year since it’s been written. Whether it will finally be put to a vote next week is not yet known because of controversy over its wide scope and who it will be applied to.

Under the bill, whose official name can be roughly translated to as an “act on preventing the taking and giving of bribes for influence-peddling,” public officials will be criminally charged and could face up to three years in prison if they are found to have received money or items worth 1 million won ($900) or more on one occasion, regardless whether the payment was intended for a particular favor. Also, a public official can be prosecuted even if he or she did not provide a favor in return for the payment or gift.

The official will also be indicted if he or she receives numerous payments that add up to 3 million won in a year.

If a public official receives money or goods worth less than 1 million won in connection with influence-peddling, he or she will be liable to a fine of up to five times the value of the money or gifts received.

A controversial facet of the bill is that it also encompasses relatives of public officials, an aggressive cracking down on a public sector long accused of overly cozy ties with the private sector.

If relatives of public officials receive money or gifts worth 1 million won for influence-peddling, the official - but not the relative - will be subject to legal punishment. For less than 1 million won, officials will be fined up to five times the value of the bribe.

The proposed bill has a wide definition of who is a public official. The term includes staff members of private high schools and universities, kindergarten teachers and journalists because it considers the nature of their work “public.”

As news of the bill’s passage through the subcommittee spread, lawmakers started complaining anew that the bill goes too far by including relatives of public officials and non-government workers. All together, the number of people subject to the antigraft bill could reach as many as 20 million, according to Saenuri lawmaker Kim Jin-tae, who opposes the bill.

“It is a violation of legal proportionality for a public official to face criminal charges for the wrongdoing of his or her relative, and it is too much of a stretch to include journalists and private school teachers in the bill,” said prosecutor-turned-lawmaker Kim.

Saenuri Rep. Kim Do-eup also voiced his reservations about the bill in an interview with the JoongAng Ilbo.

“Under criminal law, a graft charge can only be constituted against a defendant when it is confirmed that it was related to influence-buying,” he said. “But the Kim Young-ran law aims to punish officials regardless of the nature [of the gift] just because they work for the government.”

But public support for a stronger antigraft bill has grown since rampant corruption between the public and private sector was laid bare through the sinking of the Sewol ferry last spring, which left over 300 dead.

If adopted, the new law is expected to bring revolutionary change to the way public officials interact with the private sector.

In a 2014 Global Competitiveness Report by the World Economic Forum, Korea came in 133rd out of 144 countries surveyed in terms of transparency of government policymaking.