Poster offends families that have a single child

Poster offends families that have a single child 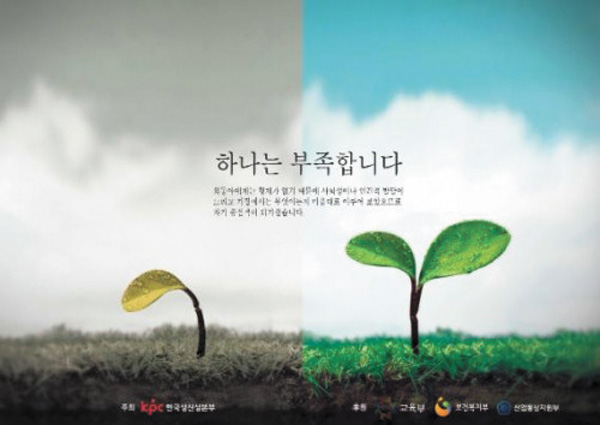 The poster that provoked criticism from families with one child. Provided by KPC

An award-winning poster by a government agency to boost the plummeting birthrate has been blasted for promoting discriminatory attitudes toward only children.

The Korea Productivity Center hosted a poster competition on the theme of increasing Korea’s low birthrate last August, and several posters were selected to receive prizes. The center is an arm of the Ministry of Trade, Industry and Energy. The Education Ministry and the Health and Welfare Ministry were also sponsors of the event.

The text on the poster reads, “Because an only child does not have siblings, he or she can be slow in social and human development. Because he or she had control at home, an only child can easily become selfish.”

Because the poster won a gold prize, it was displayed in a three-day exhibition at Gyeongbok Palace last August.

The poster provoked angry responses in Internet communities where users share child-rearing information. Several posts complained about the poster, and parents of only children said they will make official complaints.

As controversy grew, the Korea Productivity Center issued an apology Friday for its lack of consideration for families with single children. The center said it will recall the award.

Korea’s total fertility rate - the average number of children born to a woman over her lifetime - continued to plummet over the past decades. In the 1970s, it was 4.53, and birth control was one of the key aspects of the government’s population policy. A decade later, that figure had dropped to 2.83. And last year, it plummeted to 1.19.

It was not the first time a government ministry or a state-run corporation was criticized for an insensitive poster.

Last month, the Ministry of Health and Welfare created a poster to promote birth control, and many complained of gender discrimination.

“You can entrust him with everything, but not birth control,” the poster’s slogan read. The artwork showed a couple. While the man was holding the woman’s pink handbag and six more shopping bags, the woman was smiling and not carrying anything.

After the ministry made the poster public through social networking services, some Internet users complained that the poster promoted the idea that birth control was solely the responsibility of women.

Others complained that women were described as being dependent upon men.

The National Pension Service’s award-winning poster also drew criticism. After a competition last year, the state-run pension operator gave the top prize to a poster that said, “Which handle would you like to hold when you are 65?” The artwork contrasted a handcart carrying recyclable paper and a luxurious travel suitcase.

The poster was criticized for belittling the elderly who make their living by collecting paper and boxes to recycle. 