Next goal: Place in the quarterfinals

Next goal: Place in the quarterfinals 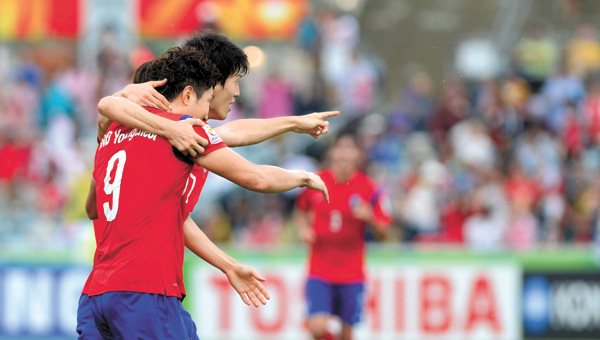 Striker Cho Young-cheol (9) of the national team celebrates after scoring a goal in the Asian Cup Group A match against Oman on Saturday in Canberra, Australia. [NEWSIS]

The Taegeuk Warriors, who got off to a good start by beating Oman, 1-0, in the first Group A match on Saturday, are only one step from moving onto the quarterfinals of the Asian Football Confederation’s Asian Cup in Australia.

South Korea can secure a spot if it wins its next group match on Tuesday against 125th-ranked Kuwait, one of the lowest-ranked team in the Asian Cup this year in addition to 150th-ranked North Korea.

However, the weakest team in Group A is known for its teamwork as the 23-man roster includes 10 first-tier players from the Kuwait league’s best team, Al Qadsia SC.

Key players for the Middle Eastern country are forwards Yousef Nasser of Kazma and Bader Al-Mutawa of Al Qadsia.

Nasser, who has kept his name on the national team roster since 2009, has 32 goals in 56 international matches.

Veteran Al-Mutawa, 33, has appeared in 150 international matches and has 47 goals. Defender Hussain Fadhel of Al-Wahda, loaned from Al Qadsia, has become another threat, as he scored the opening goal against Australia on Friday, though Kuwait lost, 4-1.

The first-place finisher in Group A will meet the runner-up of Group B in one quarterfinal match.

But Korea is currently the runner-up to Australia on goal difference. Korea’s team manager, Uli Stielike, also said after Saturday’s match that he “would like to avoid playing in Brisbane, which will host the semifinal match between the Group A’s runner-up and Group B’s leader, because the condition of the stadium in Brisbane is known to be poor.”

In Group B are Uzbekistan, China, Saudi Arabia and North Korea, and 71th-ranked Uzbekistan is considered the strongest. China is ranked 96th and Saudi is 102nd.

Korea won the first group match held at Canberra Stadium on Saturday, with striker Cho Young-cheol’s goal in injury time during the first half. Koo Ja-cheol of Mainz 05 fired a midrange effort, which was blocked by Omani goalie Ali Al-Habsi of Wigan Athletic, and Cho, of Qatar SC, put the ball in the net.

The Taegeuk Warriors outperformed Oman in the number of goal attempts and time of possession, but their performance on Saturday did not leave fans with much confidence that their team will be able to achieve its ultimate goal - winning the Asian Cup for the first time in 55 years.

Two national team members - defender Kim Chang-soo of Kashiwa Reysol and midfielder Lee Chung-yong of the Bolton Wonders - were substituted due to injuries, though a Korea Football Association official later announced that the injuries were not serious.

And the defense did not appear to be steady enough, especially when Omani players grew more aggressive in the final minutes.

In second-half injury time, Amad Al-Hosni of Saham SC headed a corner kick toward the net, but goalie Kim Jin-hyeon of Cerezo Osaka managed to block the ball and it bounced off the crossbar.

Kim is expected to be in the starting lineup for the next match on Tuesday after impressing the German manger on Saturday after another great performance in the friendly against Saudi Arabia on Jan. 4.