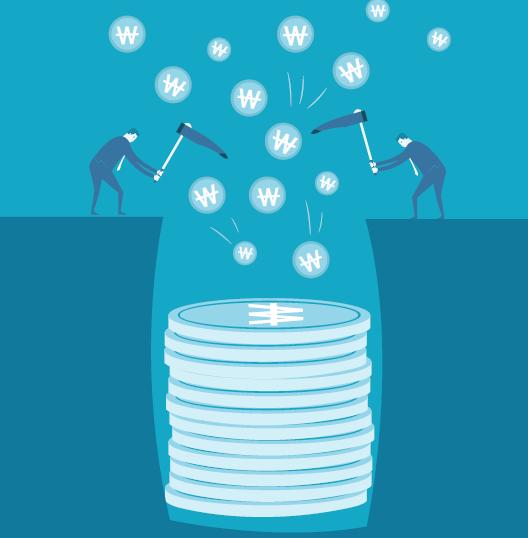 An agent for the National Tax Service (NTS) has to keep his ears open. Even the most trivial conversation can impart important information.

Among laypeople, those are trivial details. But to a tax agent, those light conversations could hold vital information that could help crack down on tax evasion.

The 20,000 agents working at 115 tax offices across the nation are always on alert to jot down information that could lead somewhere. They dig in further, ask follow-up questions, search the Internet. 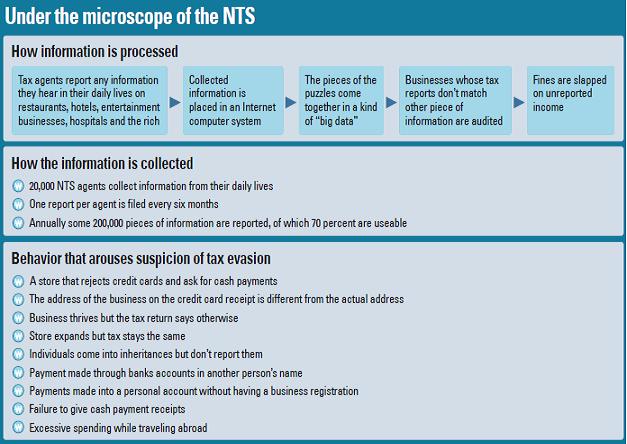 Then each piece of information is put in to the computer system for NTS investigations.

It’s the NTS’s version of “big data,” a means of investigation the agency started practicing in 2010. At first there were doubts about the use of stray bits of information. The agents themselves didn’t have much passion for reporting information about small stores with limited earnings or neighborhood bakeries or pharmacies, which hardly seemed like evil geniuses of tax evasion. Some just made reports to fill their mandatory quotas.

When the NTS decided to reduce the quota from one report a month to one every six months, the quality of information improved vastly. Information started snowballing, particularly on high-earning professionals like doctors and lawyers.

It’s a commonly known fact that hospitals specializing in plastic surgery, dermatology and ophthalmology hide their actual earnings by taking payments in cash rather than by credit or debit card, which can be used to track down earnings.

It’s not easy for the NTS to assess the actual earnings of these hospitals. Even patients keep mum because they’re given benefits for paying in cash, like major discounts.

So information collected through stray conversations and rumors are an important way to fill in the gaps in tax evasion investigations.

Information provided by retired employees of companies can be vital evidence for the tax agency’s investigations.

According to the agency, there are false leads and information that proves to be insignificant. But 70 percent or so of the information it collects is used effectively for analysis.

The cat and mouse chase between tax evaders and the agency has now become a war of information. Tax evaders are not only smarter than before, but are also better organized. And the NTS can’t crack down without evidence.

In some cases there are receipts that misstate the size of the transactions to reduce the value-added taxes or increase a tax refund. Due to such malpractices, the NTS failed to collect an estimated 5.7 trillion won in income taxes last year.

Transactions on the Internet are also causing challenges for the NTS.

There are numerous cases of Internet vendors who haven’t registered their businesses, or receive payments through an account in a third person’s name so their actual earnings can’t be traced by the tax agency.

Some blogs or Internet communities, which are called Internet cafes in Korea, do business through personal bank accounts to avoid paying taxes.

As a countermeasure, the NTS has been increasing its information collection. Next month it will be starting a next generation tax administration system that would place comprehensive real estate tax, year-end tax settlements and cash receipt information on a single website. This will help the agency track tax evasion.

The NTS is expecting the new system to help improve false reporting on year-end tax settlements. Also a Foreign Account Tax Compliance Act signed with the U.S., which goes into effect in September, will help track offshore tax evasion. The Internal Revenue Service will be providing account information on Americans living in Korea as well as Koreans living in the U.S. to the Korea tax agency.

So what kind of information are the tax agents particularly attuned to?

Mostly it’s about stores or businesses that try to pursaude customers to pay in cash, refuse to provide cash receipts and those that falsify their addresses on their credit card information.

The NTS monitors these businesses and scrutinizes their tax payments. If it suspects that its tax return or payments (including value-added taxes and comprehensive income tax) seems to small compared to the data the agency has collected and analyzed, the business becomes a candidate for a tax audit.

If a business expands its size and increases staff because things are going well but doesn’t pay much more in tax, such businesses are also suspected of tax evasion.

If an individual has had a death in the family that led to an inheritance and fails to report it, an investigation is begun.

Property leases are also vital information for tax investigations. For example, rent on a commercial space may be known to be expensive but when the landlord files his tax return, the amount is understated. An audit will follow and the lease will be a vital piece of evidence.

“There are general profit ranges for any businesses, yet if the tax payment made is smaller than is expected, one could be suspected of tax evasion,” said an NTS official.

The tax service plans to step up its information collecting system this year. To enhance its field investigations, some 140 employees with experience of more than 15 years will be allocated to investigation departments across the country.

This is to raise the competitiveness of the agents’ information collection ability.

The change in investigation methods is largely due to a changing business environment, including new technologies.

In the past, tax agents were sent to a business once or twice a month, where they were stationed to compare the actual business including profitability with the tax payments that were made. It was more of a desk job.

But such audits became difficult as the number of businesses increased significantly and the transactions are now digitalized. The old ways were not only outdated but ineffective.

Additionally, a tax agent going through files while staying onsite at a business seems to have deterred economic activities that, in the long run, had an impact on the overall economy.

As the Korean economy has been stuck in low growth since 2012, the government is faced with a tax shortfall. In the past three consecutive years, the nation suffering a shortfall of about 10 trillion won. The NTS had to find a systematic investigation method that is both effective yet affects businesses less than in the past.

Neighbor Japan also needs larger tax collections and is taking a similar approach. It’s collecting information down to the smallest detail from people’s daily lives. When its agents go to restaurants or coffee shops they check the bills to see if the price or the name of the store is properly printed on the receipt. In Japan a business becomes a tax evasion suspect if it doesn’t print out a receipt because cash payments are the norm there.