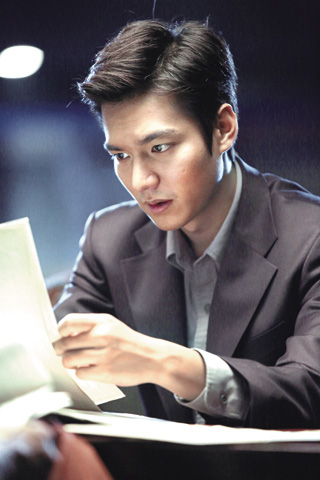 Gangnam District in southern Seoul was not a symbol of wealth until the 1960s. In fact, it used to be a wild plain before a plan to develop the area was launched in the 1970s.

“Gangnam Blues,” directed by Yoo Ha, is an action-noir film set in the latter decade.

It is the story of two ambitious but impoverished youths, Kim Jong-dae (Lee Min-ho) and Baek Yong-ki (Kim Rae-won).

The film is also the finale of a trilogy that illustrates the history of Gangnam.

Jong-dae and Yong-ki were close friends when they grew up together in an orphanage, but they later become foes when they chose to work as gangsters in different crime rings in order to overcome poverty.

The war between the gangs becomes particularly heated when the mobs opt to work for opposing politicians in order to gain higher profits from Gangnam’s South Seoul Development Program.

Don’t expect Lee from TV dramas “Boys Over Flowers” (2009) and “The Heirs” (2013) to stick to his usual prince charming role for this film. Instead he stars as Jong-tae in “Gangnam Blues,” who is homeless until he becomes a gangster. 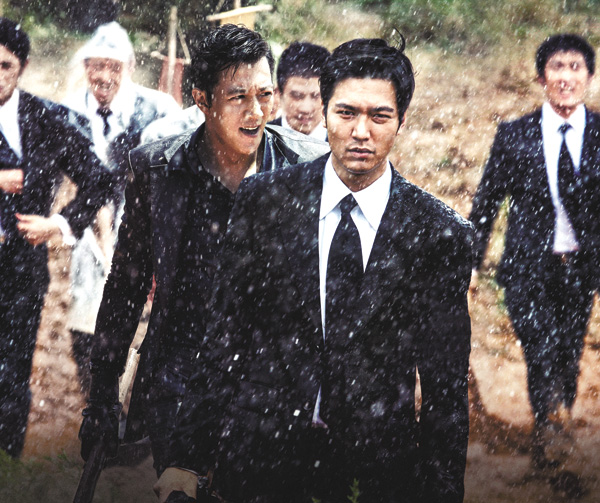 Lee plays Jong-dae, as seen in this still from the movie “Gangnam Blues.”

Through his first title role on the silver screen, it is possible that Lee will transcend his current image as a popular teen star and turn into a young protagonist with wonderful acting skills.

Q. Was “Gangnam Blues” more of a challenge than the roles you usually play on TV?

A. I wanted to star as a protagonist in a film when I decided I was completely ready. I liked the character Jong-dae in “Gangnam Blues” because he is about my age. Every actor would love to take on the chance to play a masculine character, and “Gangnam Blues” was the right opportunity for me.

What is Jong-dae’s attraction as a man?

What Jong-dae wants for his life is not his own happiness. Instead, he wants to make other people happy, like Kil-soo, who is a father figure to Jong-dae; Sun-hae, who he regards as his real sister; and Yong-ki, his brother-like friend.

To provide a better life for the people he loves, he lives fiercely. He becomes a gangster and struggles to acquire his own land in Gangnam for this reason. This is how Jong-dae is different from Yong-ki, who follows his own desires. I think Jong-dae is the most good-hearted gangster character out of all the director’s films.

When you were playing Jong-dae, did you understand the choices he made?

I used to become frequently upset when I first played Jong-dae. The situation pushes him to choose not what he really wants - to live with his loved ones without worries - which frustrated me. I was depressed when I acted out these scenes. I felt sad and feel sympathy for him even now.

Have you ever wanted to have something as much as Jong-dae? When he dreams of owning his own land?

I got into a car accident in 2006 when I was a college student at Konkuk University right after I started to act. When I was in the hospital, I realized that I truly wanted to perform. At the time I sincerely hoped that I would recover because the doctor wasn’t even sure whether I would be able to walk again or not.

Teen stars Zo In-sung and Kwon Sang-woo gained recognition as mature actors for their performances in Yoo Ha’s “A Dirty Carnival” and “Spirit of Jeet Keun Do: Once Upon a Time in High School.” How do you think Yoo elicits such subtle emotions from the actors he directs?

Yoo is a director who thinks about the movie he is working on for about 20 hours a day.

When I worked with him, I was determined to put more effort into coming up with a better performance.

I heard a lot about how Yoo is strict with his actors and film crew, but the staff on “Gangnam Blues” said this was the most relaxed film set they have ever experienced.

I was puzzled during a very important emotional scene when the director said “Cut!” and “Excellent!” because he usually does not confirm how you are doing as an actor with words.

Did you enjoy the film’s 1970s retro props and clothes?

I was surprised when I saw a signboard saying that red bean sherbet was 50 won (around 5 cents). It was so fresh and peculiar. The first time I wore the clothes, I thought, “Is this really a good idea?” But they became very comfortable by the end.

My generation only knows the recent Gangnam, which is crammed with glamorous neon signs and full of wealthy people. It was worthwhile to learn about what happened in Gangnam through this film.

I think 1970s Gangnam is the emotional hometown of director Yoo-ha. Is there a specific time period or place you like best?

My generation, people who were born in the 1980s, experienced both an analog and digital time. I still remember how I was surprised when I first experienced the Internet.

The bridge period of the 1990s to 2000 was the most influential time for me in an emotional way. I still feel amazed by how much the world changed within a few years.

What’s your most vivid memory from that time?

I was totally shocked when I saw pornography on the Internet! [laughs]

How did you feel when you were shooting the mud-fighting scene? I heard it took 800 tons of water, 150 extras and a week of filming.

I didn’t want to show off while I was filming the action scene. Rather, I wanted to convey Jong-tae’s feelings through a real action scene that could touch the viewer’s hearts deeply.

I attempted to empathize with Jong-tae, and then I became immersed in his anger. It made me able to ignore how tough shooting the scene was. Yet the crew said after filming that my eyes were quite scary. I think my eyes changed in spite of myself.

I heard you’re very busy when you go overseas because you have a lot of fans outside Korea.

I feel that my eyes and mind are more open after making my debut in other countries. It made me want to challenge myself more.

Do you consider your popularity and fans overseas when you choose a film?

I don’t think I consider those facts. I follow my emotions instead.

For instance, I choose a film about fated love when I feel tired of my repetitive life, which revolves around only work and home. I don’t have enormous life goals as an actor when I look 10 years ahead.

I also don’t agonize over my acting style. I want to gain credit and love from fans for my performances with every film I appear in. I want all of my work to follow this attitude.