Brady leads Patriots in a playoff comeback for the ages

Brady leads Patriots in a playoff comeback for the ages 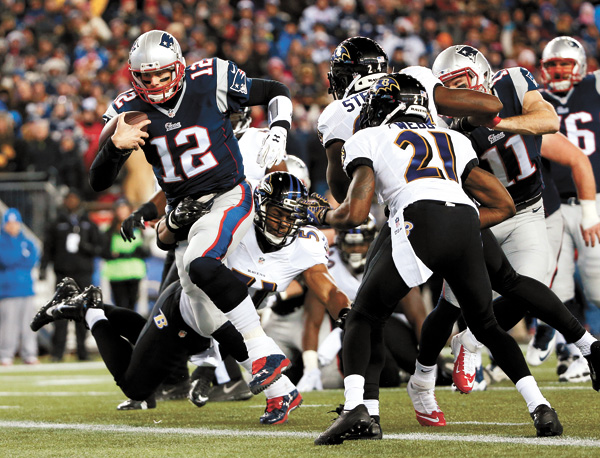 New England Patriots quarterback Tom Brady scores on a four-yard touchdown run in the first half of an NFL divisional playoff football game against the Baltimore Ravens on Saturday, local time, in Foxborough, Massachusetts.[AP/NEWSIS]

One big comeback, then another.

And now another game for Tom Brady and the New England Patriots.

The quarterback who treats deficits as distractions dug the Patriots out of two 14-point holes - the first team to do that in NFL playoff history - to reach the AFC championship game for the fourth straight year with a 35-31 win over the Baltimore Ravens on Saturday.

“Behind twice by 14 wasn’t necessarily in the plan,’’ Brady said. “It took a lot of execution to overcome it.’’

Thanks to three touchdown passes by Brady and one by college-quarterback-turned-receiver Julian Edelman, the resilient Patriots kept their season alive.

“Right now, it’s all about giving us a chance to come to work again,’’ said safety Devin McCourty, who batted down Joe Flacco’s desperation pass into the end zone on the last play.

Brady led a masterful march - completing eight of nine passes and running for a first down - to the decisive 23-yard touchdown completion to Brandon LaFell with just over five minutes left to give the Patriots their first lead.

The top-seeded Patriots (13-4) will host the winner of Sunday’s Indianapolis-Denver game in the AFC title game. The sixth-seeded Ravens (11-7) had won two of three playoff games in Foxborough, Massachusetts, over the past five seasons.

“We came to their home field and fought them to the end and we just came up short,’’ said Kamar Aiken, who caught one of Flacco’s four touchdown passes.

Brady completed 33 of 50 passes for 367 yards for an offense that picked up just 14 on the ground, the second fewest in team playoff history. His 46 career playoff touchdown passes surpassed Joe Montana’s 45 for most in NFL history.

Forsett had an outstanding season replacing the Ray Rice, who was suspended and then released for domestic abuse.

“We’re all faced with challenges in life,’’ Baltimore Coach John Harbaugh said, “and, as a teacher and coach that’s what you ask of your guys. I guess what I’m saying is I’m so proud of the way they handled it.’’

“We had two separate 14-point leads. Those guys did a good job getting it back to seven as quickly as they could,’’ said Flacco, who threw his first two interceptions in six playoff games. “They don’t panic.’’

“It was a wild game,’’ Patriots coach Bill Belichick said, “but I’m just thankful our players hung in there and made the plays they needed to make.’’