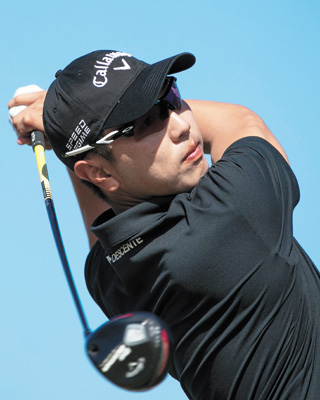 Bae Sang-moon follows his drive on the 16th tee during the second round of the Hyundai Tournament of Champions on Saturday, local time, in Kapalua, Hawaii. [AP/NEWSIS]

Bae Sang-moon, recently embroiled in controversy over his military duty, is tied with three Americans for the lead in the Hyundai Tournament of Champions, the opening tournament of this year’s PGA Tour.

In the second round of the tournament held at Kapalua, Hawaii, Bae birdied the fourth, fifth, sixth and 10th holes.

He finished the round with a 4-under 69 to tie Russell Henley, Zach Johnson and Jimmy Walker.

Johnson putted for birdie on every hole, the fifth time in his career that he didn’t miss a green in regulation. Walker got in the mix with five birdies in eight holes.

The first thing Bae faced as he arrived at Kapalua on Friday was a crowd of reporters. Upon spotting a familiar face in the media, he broke into a big smile and said, “I made big news, huh?”

Facing uncertainty at home, the 28-year-old from South Korea showed a clear head on the Plantation Course.

He opened with six birdies in eight holes and at one point was four shots clear of the field, until he slowed on the back nine. Bae had to settle for a 7-under 66, one shot behind Henley after the opening round.

“A little bit hard to focus on my game because I got a little trouble,” Bae said. “I try to split things. But I don’t want to think about it, the other things, on the course. So yeah, I think I did really good today. I really want to the next three days, also.”

The trouble - the “big news” that Bae was referred to - was his two-year mandatory military service. Bae received a deferment and was granted an overseas travel permit to play golf, mainly in America.

But there is debate over how much time he has spent at home, and the government has denied an extension of the travel permit, requesting him to return this month.

Bae is reportedly preparing to file an administrative lawsuit and is planning to stay in the United States during the litigation.

That decision also provoked criticism in Korea, a country that is fairly sensitive about issues related to military service.

If he chooses to return to Korea by the deadline, he would be able to take part in only two more PGA tournaments - the Sony Open and Humana Challenge - and then return after nearly two years of military service. 