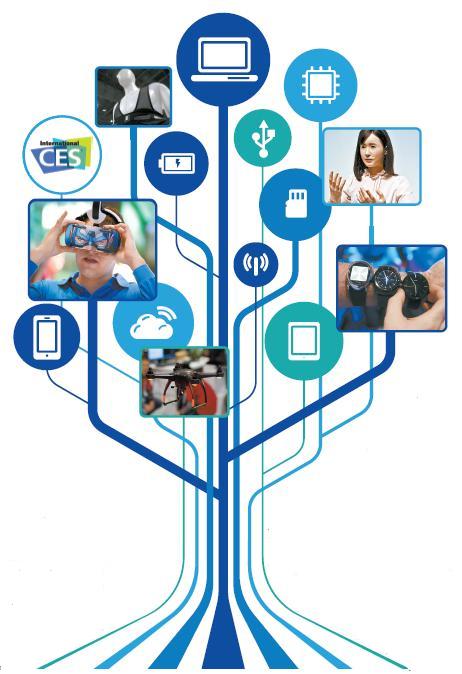 Cool technology has poured oiut of this year’s Consumer Electronics Show in Las Vegas during its four-day run that ended Friday. 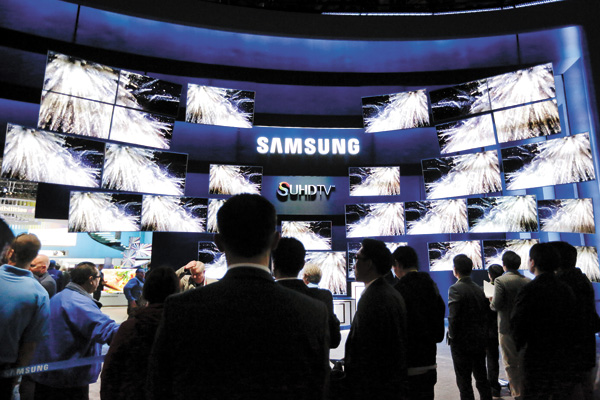 Visitors to the Consumer Electronics Show 2015 held in Las Vegas from Tuesday until Friday flocked to the booths of Samsung Electronics, to test the latest smartphones and consumer electronics. The booths of both companies were packed throughout the show. [AP]

With a million product demonstrations and events, the participating companies showed off their most impressive new products. 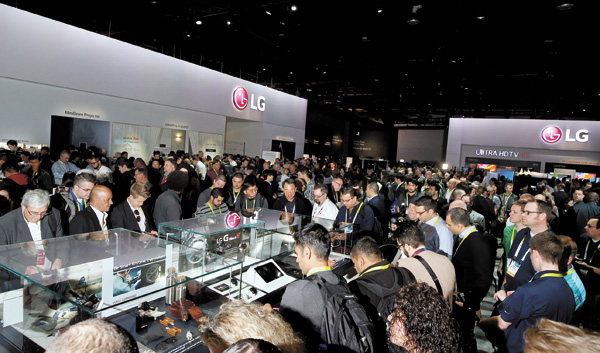 Visitors to the Consumer Electronics Show 2015 held in Las Vegas from Tuesday until Friday flocked to the booths of LG Electronics, to test the latest smartphones and consumer electronics. The booths of both companies were packed throughout the show. [NEWSIS]

Exhibitions of cutting-edge technology from 3,500 companies focused loosely on four areas - the rise of Chinese and Japanese electronics, tangible Internet of Things developments, wearable devices and attention grabbing developments such as drones and robots.

But at the CES, devices from those two countries didn’t draw as many visitors as Samsung and LG.

While Samsung and LG booths were packed with visitors each day, the displays of Chinese and Japanese companies were relatively quiet.

LG, in particular, drew in big crowds with its new G Flex 2 smartphone.

At the Samsung Electronics exhibition hall, people gathered to look at the company’s new line of UHD TVs.

LG started selling the curved G Flex 2 just a day before the CES opened, and it lured tens of thousands of people to its smartphone booth on the first day.

The G Flex 2 has a 5.5-inch curved screen and a Qualcomm Snapdragon 810 chip. It is available in silver or red and runs the latest Android 5.0 Lollipop mobile operating system.

Samsung did not introduce a new mobile phone at the CES this year, but its smartphone booth was still at capacity throughout the event.

Sony attracted some attention with a smart TV that is thinner than its Xperia phone, but the phone itself generated little interest.

Part of the reason Sony’s phones drew few consumers was because the company did not release the new Xperia Z4 at the show, as had been expected beforehand.

Huawei’s booth received even fewer visitors than Sony’s, though some people stopped to check out the Ascend Mate 7, one of the Chinese company’s most popular models.

The phone has been launched in China and some European countries but was unfamiliar to most CES attendees. However, Huawei said it plans to start selling the Ascend Mate 7 in North America this year and in Japan and Korea later.

And the company is confident the phone will be successful in the new markets.

“We have high expectations for the Ascend Mate 7 in North America, as the premium phone priced at 5,000 yuan ($805) is gaining positive responses in the Chinese market, despite its high price,” said a Huawei spokesman.

Korean electronics makers said their Chinese and Japanese counterparts should not be underestimated.

“Although Chinese and Japanese smartphone makers seemed to fall behind Samsung and LG in terms of popularity at the CES 2015 - because visitors often tend to flock to a few top-tier companies - Korean companies should remain vigilant and innovate to stay ahead,” said a spokesman for a Korean electronics company.

The president of LG Electronics’ home appliance division, Jo Seong-jin, said at the show that Chinese technology is already 95 percent of Korean techology.

UHD TVs also were a source of fierce rivalry but Samsung’s proved to be the most popular.

A large crowd amassed at front of the TV exhibit, where Samsung’s SUHD TVs were displayed, and people waited in line to try them out.

Yet again, Sony’s TVs brought in fewer observers even though the company, once a global leader in TVs, introduced an ambitious new slim 4K UHD panel.

Chinese consumer electronics company Haier also showed a huge curved TV at the front of its display along with 4K TVs on the wall behind. The company also employed female models and aired provocative content to catch the attention of the visitors, but to no avail.

New smartphones and TVs excited customers, but this year Internet of Things (IoT) products were the heart of the electronics show.

IoT is a global infrastructure that connects physical and virtual objects using the Internet.

Although IoT has been widely discussed in recent years, it has not yet become a reality.

But visitors to the CES could see that many companies have started producing tangible IoT products.

Yoon Boo-keun, CEO of Samsung Electronics’ consumer electronics unit, said at the show that in five years, all Samsung’s products will be IoT capable, meaning they can be connected.

Samsung also set up a smart-home display with appliances that can be controlled remotely through a mobile device and a smart TV that runs on the company’s Tizen OS.

Last year, Samsung acquired the tech company SmartThings, which connects and controls sensors in the home via an app, and the company said it has updated the system with more powerful sensors and coupled sensors.

At the show, it introduced a variety of appliances that support Home Chat, such as smart refrigerators and ovens.

Amid forecasts that 2015 will be the year of wearables, major new devices were on display at CES.

For the most typical wearable device, the smartwatch, the trend was circular.

Last year, major smartwatch makers came out with products that could make calls send emails and texts, navigate, play music and track health. But this year was about design.

The round-faced smartwatch Activite Pop by Withings tracks activities like walking, running, swimming and sleeping and its battery lasts several months. It is available at Best Buy for $150.

Apple plans to launch the Apple Watch in the first quarter, which is sure to fuel competition in the market.

Motorola’s Moto 360, Sony’s Smartwatch series and the Asus ZenWatch are just some of the products that are expanding the market.

Not only electronics companies, but luxury fashion brands Tag Heuer and Guess Watch introduced smartwatches at the show.

Samsung’s most popular wearable device at the CES was Gear VR. The product, which Samsung launched in December in the United States, covers the user’s eyes and ears and allows them to experience 360-degree virtual reality. Samsung also introduced Milk VR, a new version of Gear VR.

Sony showed off a test version of its Smart B-Trainer, a headset for runners. It chooses music according to the users’ heart rate and has audio-guided training sessions.

The company also showed its smart eyeglass “Attach!” which is intended to be used while exercising. It has detachable lenses with high-resolution OLED displays.

Many attendees were thrilled to see self-driving cars, drones and a lifelike robot.

Drones were one of the most hyped products at the show. The Consumer Electronics Association, which organizes the CES, said the drone market is expected to grow 50 percent this year over last year to be worth about $130 million.

The selfie drone Hexo+ received a lot of attention. It can fly up to 60 meters (197 feet)high and fly in a circle to take an all-round aerial selfie.

It can fly for 15 minutes and will land automatically if it goes out of range of the smartphone controlling it.

Toshiba unveiled a female robot called Android Woman, which got undivided attention for its lifelike features and because it can communicate in sign language. Toshiba plans to use the device to help the hearing impaired.