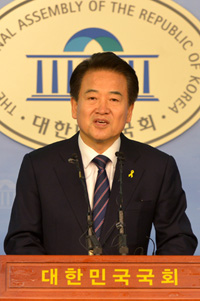 Chung Dong-young, a senior adviser for the New Politics Alliance for Democracy (NPAD), defected from the main opposition on Sunday with the aim of creating a more progressive party ahead of the by-elections in April.

“After agonizing for a long time, I decided to leave the NPAD today in order to join a [new party] to meet the demand of the times,” said Chung, a former presidential hopeful, in a press conference at the National Assembly.

Chung expressed his full support of the new party, which is expected to be more left-leaning than the NPAD. The new party is tentatively named a “meeting to create a new political leadership that can wipe the tears of the people,” or “union of the people,” and Chung said it is backed by “representative democratic and progressive leaders.”

He was also critical of the NPAD’s centralist shift and its failure to represent the needs of a broad spectrum of people. “I have always aimed for a daring progressivism with a welfare nation and economic democratization being the two pillars within the democratic party. But the NPAD now is not the democratic party aimed at being rational and progressive that I hoped to realize,” Chung said.

Chung, a veteran politician, ran as the liberal presidential candidate in 2007 but was defeated by Lee Myung-bak.

“This way is the surest path to a change in political power, and I will seek my life’s last service through this path,” he said at the conference.

A former anchor at MBC, Chung, 61, was a three-term lawmaker and former leader of the ruling Uri Party, a precursor of the NPAD. He worked as the unification minister in the Roh Moo-hyun administration, in which he was considered second in command.

But the lawmaker has scarcely been seen in politics since he lost the 2012 general election and decided not to join the presidential race.

Some 100 leaders in society have pushed for a new progressive party ahead of the April election to fill vacant parliamentary seats. They plan to tour the country starting this week to hold open debates and increase awareness of the new party.

“Chung leaving the party is very regrettable as it comes at a period when we all have to work together for a new leadership,” said NPAD spokeswoman Han Jeong-ae. “Chung compared the NPAD to a ‘mother’s bosom,’ and like a mother’s heart, we will be waiting for Chung.”

The three candidates running for chairmanship of the NPAD, Moon Jae-in, Park Jie-won and Lee In-young, all expressed their regret at Chung’s departure from the party at a press conference in Ulsan amid a nationwide tour ahead of the leadership race.

“Even if our party is not as progressive as [Chung] desires, it is more fitting to institute a more progressive direction within this party,” said Moon.

Likewise, Park commented, “We deeply regret the departure of adviser Chung, who was an asset to the NPAD, which could be an indication that our internal conflict and factionalism [in the party] were too severe.”

Chun Jung-bae, an ex-justice minister in the Roh Moo-hyun government and a former four-term NPAD lawmaker, is also considering joining the new party along with a number of other progressive NPAD lawmakers. 