Particle pollution is becoming a chronic phenomenon during winter. Experts say it has the potential to significantly disrupt urban life, and the air pollution index indicates that Seoul has become more polluted over the years.

The Korea Meteorological Administration issued a fine dust alert in Busan and Daegu on Jan. 5, as well as a fine particle pollution watch in Gwangju. Seoul also came under a 21-hour ultrafine dust alert just a few days earlier on Dec. 30.

The issue poses a myriad of public health concerns. Particles are especially dangerous because they’re not always visible to the human eye, allowing the pollution to go easily unnoticed.

Particle pollution is produced when moisture in the air combines with fine particle matter. Particles less than 10 micrometers (PM-10) in diameter, which is about one-seventh the width of a single strand of human hair, are small enough to be inhaled into the lungs. 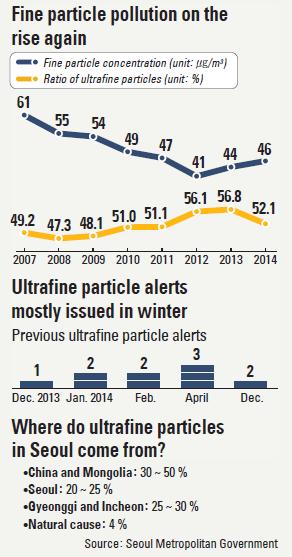 This type of pollution can also contain other elements like smoke, nitrates, dirt or metals, and make the air appear hazy.

But scientists and environment officials are most concerned about particles smaller than 10 micrometers. Fine particle matter, considered anything that is 2.5 micrometers in diameter or less, is especially dangerous. These types of particles are directly emitted from power plants, car exhausts and smoke, and usually contain various chemical elements.

In winter, particle pollution can usually be seen on warmer days. When continental high pressure in the north expands to Korea, cold northern winds blow away the dust, but when the peninsula is less affected by high pressure, the dust hovers over the country.

Measurements of this pollution are taken by testing a certain volume of air.

In a study last year, Yonsei University’s Institute for Environmental Research estimated that 1,179 people were dying annually from issues related to or caused by fine particle pollution produced on the streets.

Calculated another way, the research concluded that more than 14,000 people were losing a year off their normal life expectancy annually.

The institute also claimed in another study that going for a walk for an hour when fine particle concentrations were 162 micrograms per cubic meter had the same effect as inhaling cigarette smoke in an enclosed 60-cubic-meter space for about an hour and a half.

Fine particle alerts in Korea are issued when concentrations are 120 micrograms per cubic meter or higher.

Making matters worse, ultrafine particle pollution, which can contain heavy metals, is on the rise. Ultrafine atmospheric particles are one-thirtieth the diameter of a strand of human hair, which means they can enter deep into a person’s respiratory system.

Ultrafine particulate matter concentration last year hit 24 micrograms per cubic meter, which is lower than the domestic standard of 25 but much higher than the WHO’s standard of 10.

“Ultrafine dust may increase the risk of not just respiratory diseases but also stroke and cardiovascular diseases,” said Prof. Lee Jong-tae, from Korea University’s Graduate School of Public Health. “Our research projects that an increase of ultrafine particulate matter by 10 micrograms per cubic meter results in 389 additional deaths annually.”

China has long been blamed for atmospheric particle pollution in the country, though newer studies show otherwise.

The city government’s Climate and Environment Headquarters announced on Jan. 2 that China and Mongolia contributed to only 30 to 50 percent of ultrafine particle pollution, while 45 to 55 percent of ultrafine particulate matter was produced in Seoul and the surrounding area. The announcement was indicative of the fact that the capital city’s environmental policies will likely face major shifts.

A recent public hearing by the city government and the Ministry of Environment focused, in particular, on regulating vehicles that run on diesel fuel.

“Most of the fine dust in Seoul is produced by cars,” said Kang Gwang-gyu, a researcher at the Korea Environment Institute. “Diesel vehicles, in particular, produce black carbon, which is a Group 1 carcinogen.”

But the city government is going for even stronger measures and confirmed that it had requested the Environment Ministry to approve strong exhaust gas regulations. It is also working toward designating large green areas in central Seoul as “clean zones,” which would allow only hybrid or electronic cars to enter.

Additionally, the municipal government is looking to collaborate with other local governments that put more importance on environmental protection, such as Changwon and Jeju, to jointly invest in electric cars.

Experts say implementing anti-fine particle policies is only a matter of time, particularly given that similar measures have already come into effect in many other metropolitan cities in advanced countries.

Paris last year enforced double shifts for drivers - those with even- and odd-numbered license plates are limited to driving on certain days - after seeing fine particle concentrations exceed the country’s standard for five consecutive days. The city is currently trying to implement another regulation that would prohibit all diesel-fueled cars from entering the city center.

New York City also reduced the number of lanes in front of Times Square, a chronically congested area, discouraging drivers from entering. The New York City Department of Transportation assessed that reduction in pollution was the measure’s biggest merit.

“Europe currently has a large-scale incentives policy that rates houses according to fuel use,” said Kim Un-su, a researcher at the Seoul Institute. “The auto industry will also undergo a major paradigm shift as the use of public transportation and bicycles increase and roads become narrower and narrower.”