Market piles on tradition to pull in customers

Market piles on tradition to pull in customers 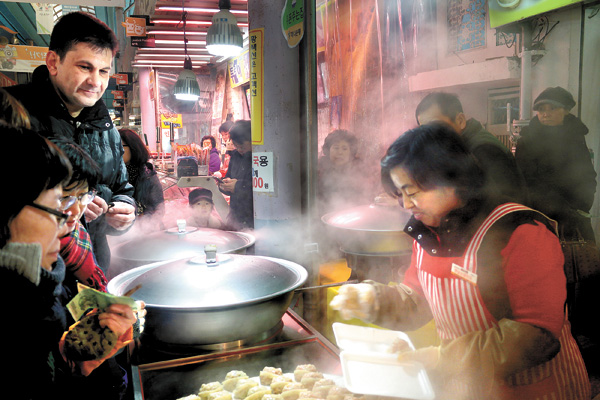 A group of foreign tourists got off a tour bus at Sin-gi market, a traditional open market in Incheon, on Dec. 31. The 20 tourists, ranging from different countries, first went to the merchant association’s building to try on hanbok, or traditional Korean clothes. Then the group headed out to the market, cameras at the ready.

A 45-year-old German tourist stood in front of a store that was cooking man-du (Korean dumplings), which he had never tried.

He was attracted by their smell, which reminded him of bulgogi (grilled marinated beef), his favorite Korean dish, he said. After tasting the man-du, he raised a thumbs-up in approval.

At the entrance of Sin-gi market, busses carrying tourists come and go in a steady stream. Every weekend, the market attracts more than 20,000 domestic and international visitors. 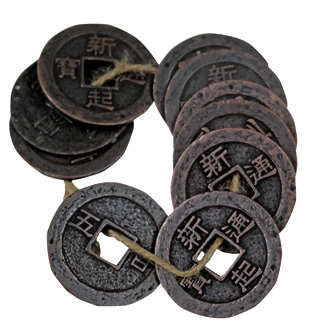 At first glance, the market seems similar to the normal open markets in Korea: rows of meat, fish, vegetable and fruit shops with merchants doing their best to attract customers.

But when visitors buy anything at Sin-gi market, they can’t use won. The only currency accepted is yeopjeon, old-fashioned Korean brass coins used in the Joseon Dynasty (1392-1910).

The market gives six coins to every tourist for free. Each is equivalent to 500 won (45 cents). They can buy more yeopjeon with their own money.

“I explain to foreign tourists that these kinds of coins were used back in the old days,” said Kim Hyeon-su, a tour guide. “It seems they enjoy using yeopjeon. Some take them back home to keep it as souvenirs.”

Sin-gi market was once a crowded market and was prosperous until the 1980s. But it started to dwindle as eight large discount and department stores moved into the area.

The market’s merchants tried their best to bring back the good old days by hosting discount events and promoting the advantages of their generally lower prices, but nothing seemed to work. Consumers liked the sleek modern chains.

Finally the merchants came up with an entirely new gimmick: to fight modernity with antiquity. They began to issue Sin-gi tong-bo, a play on the term sang-pyeong tong-bo, the name of the coin used in the Joseon Dynasty.

Even to their own surprise, it worked. The number of foreign tourists increased as word spread that they could experience Korean traditional culture along with Korean food at the market. A big boost came when Incheon International Airport started to use Sin-gi market as a destination in its free Korea transit tour - a tour for people stuck at the airport with transfers of more than two hours.

Merchants put up signs in English and Chinese and are introducing a culture of “deom” - in which a merchant throws in a few freebies with a purchase.

As the market revives, the number of stores passed down from one generation to the next has increased. Thirty percent of the stores in the market are now run by the second generation.

“Some merchants from other traditional markets come to see what we’re doing,” said Kim Jong-rin, the head of Sin-gi market. “We will keep coming up with diverse ideas such as loyalty point plans to satisfy not only international visitors but also domestic customers as well.”