Rooftop gardens spring up for a greener Seoul

Rooftop gardens spring up for a greener Seoul 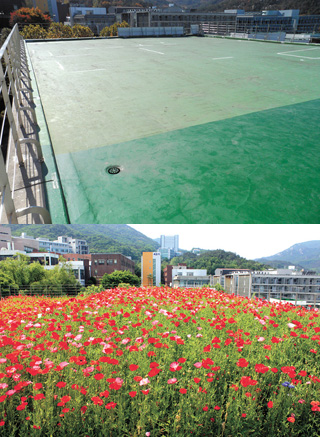 Before (top) and after images of Seoul National University’s campus rooftop garden project.Provided by SNU

Each year during early winter, students from Seoul National University head up to the rooftop of the school’s environmental engineering building to harvest cabbages.

Han Moo-young, a professor from the university’s Department of Civil and Environmental Engineering, is in charge of the rooftop garden where almost 10 kinds of vegetables are grown. He started the project in March 2013 with financial assistance from the Seoul Metropolitan Government.

The city is hoping to turn its rooftops into gardens to encourage more nature in an urban area characterized by densely packed buildings and a lack of green spaces.

The Seoul Metropolitan Government initiated the rooftop project in 2002. It finances 50 to 70 percent of the costs of growing the gardens. The local government aims to increase its high-rise gardens to 900 by 2030 to secure a green belt in the air. Seoul’s rooftops span 166 square kilometers (about 41,000 acres) altogether - a quarter of the city’s entire area.

“Our rooftop garden is a concave shape with the center hollowed, so it can also save 170 tons of rainwater at most,” Han said. “I believe the city will be able to obtain water resources as well by building these kinds of rooftop gardens.”

Implementing green rooftops has become an international trend. In Japan, newly constructed buildings of a certain scale are required to cultivate a green space on at least 20 percent of their rooftop area. And in Germany, 43 percent of local governments provide incentives for people who grow gardens on their rooftops.

Rooftop gardens also have the added bonus of increasing the temperature inside a building by 1 degree Celsius (about 2 degrees Fahrenheit) in the winter and decrease it by 4 degrees Celsius in the summer, according to the Korea Institute of Civil Engineering and Building Technology.

“As for the High Line [a raised railway line converted into a public park in Manhattan], the city of New York focused on environment-friendly factors by planting plants that grow near the area,” said Kim Wan-sun, a professor at the University of Seoul. “The Seoul city government needs to contemplate how the gardens will fit the environment of Seoul.”

But critics of the plan are questioning the sustainability of these gardens, which need constant care and management. Of the 438 rooftop gardens in Seoul, 124 were left neglected or were not properly maintained in 2013.

“When it comes to private buildings, there has been a transparency issue in using the funds for the green rooftop project, and we will announce improvement suggestions related to the problems,” said Lee Won-young, head of the Landscaping Department at Seoul City.