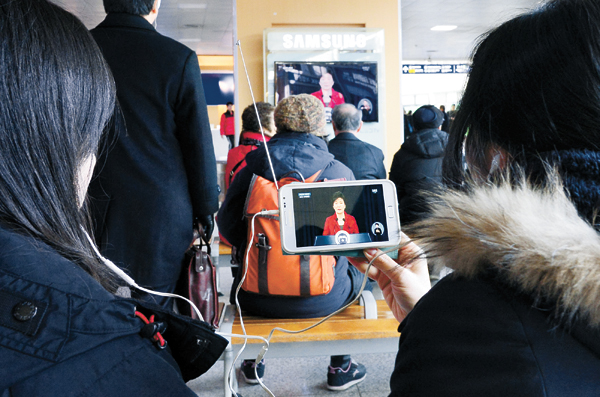 People at Seoul Station watch the New Year’s address by President Park Geun-hye on their smartphones and digital TVs on Monday. The financial market responded quickly after she mentioned on the nation’s key interest rate as yields on treasuries fell sharply to the 1 percent level. [NEWSIS]

The government “will ensure that macroeconomic policy organizations collaborate to come up with timely responses,” including interest rate cuts when needed, said President Park Geun-hye on Monday while dismissing concerns about deflation.

After the president’s remark during her New Year’s address at the Blue House, the bond market quickly responded on speculation of a possible third cut in the benchmark interest rate.

The Bank of Korea, which has cut the key rate to 2 percent, the lowest since 2009, will hold its first meeting of the year on Thursday.

“The monetary policy committee will decide on its neutral, objective position,” said Jang Byung-wha, senior deputy governor of the central bank. “We understand the president’s remark as theoretical, which means the importance of timely management of rate policy.”

Although the BOK is independent under the law, it is widely believed that the central government influences its decisions.

In the rate cuts in August and October, pressure was reported from Finance Minister and Deputy Prime Minister for the Economy Choi Kyung-hwan for the central bank to be a partner in the government’s campaign to prop up the economy.

Choi, a close aide to President Park and former head of the ruling Saenuri Party, took the role of the nation’s leading economic policy official in July with an agenda to prevent the economy from losing steam.

In April, the Sewol ferry disaster that killed more than 300 passengers, mostly high school students, dampened consumer spending and was a drag on the economy, which had been on track to recovery.

Although BOK Gov. Lee Ju-yeol has said that monetary policy committee decisions are made based on objective data, the BOK appeared to go along with the central government.

The market was surprised that the president herself stepped up to say the government would exert pressure for “timely responses,” especially when rumors are circulating that the central bank will make its third cut.

The president’s words were interpreted as a command to the central bank.

Starting her third year in office, Park showed her determination to help revive the economy through structural reform in four major areas.

“Now is the golden time for our economy to secure new growth engines to survive intensifying global competition,” said Park. “This is not a matter of several years, but for as long as 30 years for our future generations.”

The president dismissed worries about deflation, saying the nation’s inflation index is quite low as it stays in the 1 percent range but shows stability.

“The government has applied 46 trillion won [$36.9 billion] worth of fiscal and financial measures, while earmarking the largest budget ever and front-loading it in the first half of this year to sustain the expansionary macroeconomic policy,” Park said. “If all goes as planned, it will be possible to reach 3.8 percent growth this year.”

“The four areas are closely linked and are important pillars of the economy,” she said. “Long-time inefficiency in those areas has been a major factor in undermining the competitiveness of the economy.”

“By March, I hope the government, labor and management representatives will produce an agreement to improve working conditions,” she said.

The government is currently focusing on overhauling the government employee pension by April, she added, while it may consider reviewing teachers’ and solders’ pensions later.

“The press conference showed the president is strongly committed to boosting the economy,” said Kim Jung-sik, an economics professor at Yonsei University. “The government plan seems well organized. It looks to me that the government’s goal is to boost the market in the short term and carry out reforms successfully in the long term.”

For the first time, the president also mentioned special releases on parole for heads of conglomerates.

“Entrepreneurs should not receive privileges just because they are heads of conglomerates,” she said.

“At the same time, they should not be subject to discrimination.”

Park hinted that the Ministry of Justice should deal with the issue by taking into account fairness and public sentiment.

The business community saw it as a positive sign that the president passed the issue to the ministry and related government agencies instead of rejecting outright parole for business leaders in prison.

“Although what the president has said does not signify changes in her position, Park, in some part, seems to agree with the need for granting special release on parole,” said an anonymous source in the business community. “There seems to be a bit of flexibility in her existing stance, which was to never allow parole during the her term of office.”

Choi and key figures from the government have continually raised the need to free jailed business leaders.

Saenuri Party Chairman Kim Moo-sung and some other lawmakers have also mentioned it as necessary to revitalize the economy.

Meanwhile, business organizations such as the Federation of Korean Industries and the Korea Chamber of Commerce and Industries are busy assessing public opinion regarding the issue while refraining from comment.

SK Group also has tried to remain silent while Chairman Chey Tae-won is behind bars.

“It is not the most desirable situation that the chairman’s vacancy continues, considering the difficult business environment,” the source said.

“But we have nothing special to say about the parole of Chey or other business leaders.”